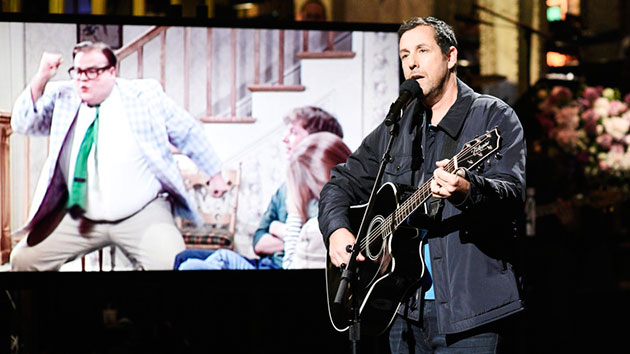 (NEW YORK) — Adam Sandler returned over the weekend to host Saturday Night Live for the first time since he left the show 24 years ago, delivering laughs, a touching tribute to his former cast mate, Chris Farley, and a much-needed ratings boost.

Sandler joined SNL in 1990 as a writer before later earning his spot as an on-air regular.  However, he was fired five years later, along with fellow “bad boys” Farley, Rock, David Spade and Rob Schneider.

Sandler closed out the episode with a touching tribute to Farley, who died of a drug overdose in 1997 — a four-minute-plus song that recapped the pair’s personal friendship and Farley’s time on SNL, as clips from the comedian played on a screen in the background.  Sandler debuted the song in his recent Netflix comedy special, Adam Sandler: 100% Fresh.

Earlier, Chris Rock joined Sandler for his monologue — a song about being fired from the show.

Sandler and Farley last appeared as regular cast members in a 1995 show hosted by Bob Saget and featuring TLC as the musical guest, though Farley played Newt Gingrich in an episode in 1996.

Girl, 15, stabbed to death in grocery store during fight with four younger girls
Biden set to sign ‘Made in America’ executive order
Kansas City Chiefs, Tampa Bay Buccaneers advance to Super Bowl 55
Biden to lift Pentagon’s ban on transgender people serving in military
Station wagons are back. And they’re faster than ever
7,000 National Guardsmen to remain in Washington through mid-March