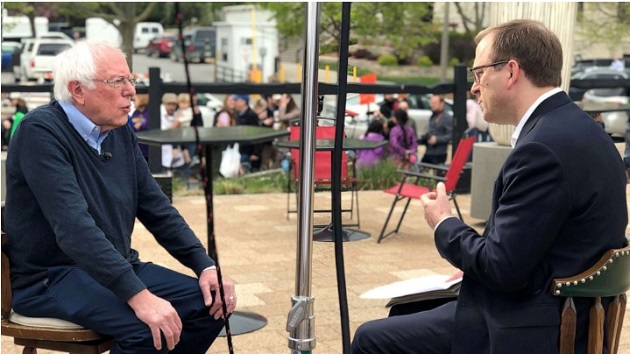 (DES MOINES, Iowa) — Sen. Bernie Sanders pushed back against former Vice President Joe Biden’s claim that he has “the most progressive record” of any candidate in the Democratic presidential field, citing Biden’s votes as a member of the U.S. Senate as evidence that his views were not always in line with the nation’s liberals.”I think if you look at Joe’s record and you look at my record, I don’t think there’s much question about who’s more progressive,” Sanders, I-Vt., told ABC News Chief White House Correspondent Jonathan Karl in an exclusive interview from Des Moines, Iowa, that aired on “This Week” Sunday.”Joe voted for the war in Iraq, I led the effort against it. Joe voted for NAFTA and permanent trade relations, trade agreements with China. I led the effort against that. Joe voted for the deregulation of Wall Street, I voted against that,” the senator recounted, after first noting that he considers Biden “a good friend” and was not there to “attack him.”The explanation is the latest in a series of answers Sanders has given in the past week differentiating himself from his fellow 2020 Democratic primary front-runner — the pair have topped nearly every poll gauging the race — following Biden’s formal entrance into the race on April 25.The former vice president, who represented Delaware in the Senate for 36 years prior to his elevation to the country’s number-two office, was responding to claimed criticisms by the “new left” — the increasing wave of liberal Democrats, many of whom cite Sanders’ 2016 presidential run as inspiration for their views — when he touted his “progressive record” before a home-state audience in a March speech.Though Biden’s emergence in the race has attracted the majority of election-related headlines in the past week, the candidate most typically associated with Sanders is Sen. Elizabeth Warren, D-Mass., who occupies a similar position on the left flank of the field’s ideological spectrum and whom Sanders acknowledged as a “progressive candidate.””I think Elizabeth Warren is a very good senator,” Sanders said on “This Week,” adding, “She is a friend of mine. She’s a serious candidate. She’s a good candidate. We have differences; we agree on a lot of things. We’ll let the voters sort it out.”As for one of those differences, Sanders demurred at the idea of eliminating the Senate filibuster, an action now called for by Warren, saying it would “convert the Senate into the House of Representatives.” He did, however, share his view that the process needed reform.Sanders’ interview on “This Week” comes in the midst of a two-day, six-stop tour across Iowa, during which he is scheduled to roll out an “agriculture and rural investment” policy. On Saturday, he was mobbed by crowds as he walked through Des Moines’ downtown farmer’s market, less than three years after he shocked the Democratic establishment by falling less than one-half of a percentage point from winning the Iowa caucuses — a moment he describes in his current stump speech as one that jump-started the party’s progressive movement.On “This Week,” Sanders drew the connection between his 2016 platform and the goals currently being pursued in Washington.”You know, when I talked about a $15 minimum wage … four years ago that was too radical, that was extreme,” he said. “Today, six states have already passed that and I suspect the U.S. House will pass $15 an hour the next month or two. So ideas that we’ve brought forth have helped transform the discussion in America.”But while the House was injected with a corps of young freshmen legislators via November’s midterm blue wave, the senator seemed to suggest that the “new generation of leadership” that some of his primary rivals are pitching as they seek the White House would be missing a key attribute.”I will not criticize my opponents for not having a whole lot of experience, that would be wrong,” said Sanders, a veteran of nearly three decades on Capitol Hill.Though he would not provide a prediction for this year’s caucuses, he laughed when asked by Karl for a short list of potential running mates. Sanders said he “would give very serious consideration” to being joined on the ticket by a woman, but stopped short of making the same commitment in regard to a possible vice presidential candidate of color.”I think it’s premature,” he said. “It would be silly to make that statement right now.”