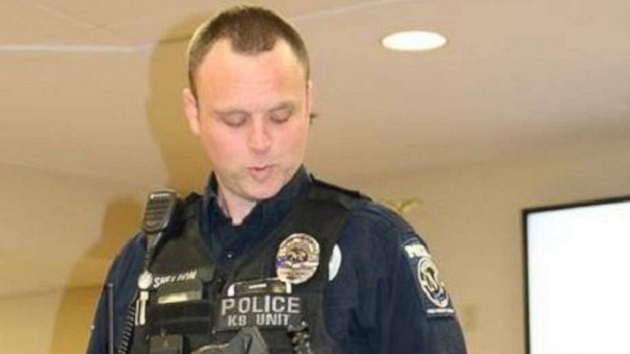 Mooresville Police Department
Posted on May 5, 2019 by ABC News

(MOORESVILLE, N.C.) — A police officer in North Carolina was shot and killed late Saturday during what authorities described as a routine traffic stop.Mooresville Police Department K-9 officer Jordan Harris Sheldon, 32, was shot at about 10 p.m. after stopping a vehicle on West Plaza Drive, police said. Mooresville is about a half hour north of Charlotte.Sheldon was taken to a local hospital, where he died of his injuries.The suspect fled the scene after the shooting, but was tracked to a nearby apartment building, Mooresville police said. The suspect was found dead of a self-inflicted gunshot wound after officers entered the person’s home.Sheldon had been with the department for six years.Details of why the suspect was pulled over or why they opened fire have not been released.Local and state law enforcement agencies are helping with an investigation into the shooting, Mooresville police said.Sheldon is the 16th police officer to be fatally shot in the country this year, according to the Officer Down Memorial Page, which tracks police deaths.Mooresville is known as one of the hubs of NASCAR, with many prominent auto racing teams headquartered in the town, including Team Penske, MTJ Motorsports, Kasey Kahne Racing and Dale Earnhardt Jr.’s JR Motorsports. The now-retired Earnhardt lives in Mooresvile, which is also the location of a museum dedicated to his father.Copyright © 2019, ABC Radio. All rights reserved.