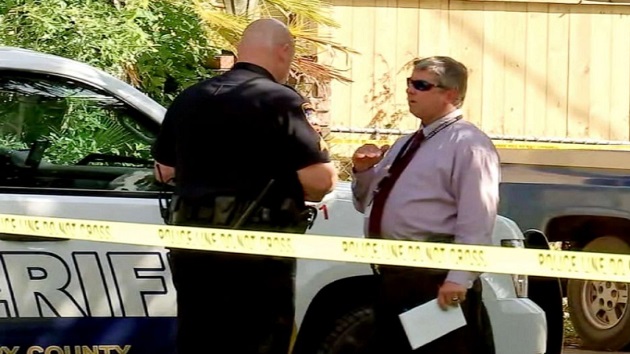 (HOUSTON) — A 10-year-old Texas boy was shot to death after his 12-year-old sibling allegedly got access to a gun and shot the child in the chest, authorities said on Sunday.The fatal shooting occurred on Saturday afternoon at a rural property in Conroe, about 50 miles south of Houston, according to the Montgomery County Sheriff’s Office.”Based on the investigation conducted by the Montgomery County Sheriff’s Office, a 12-year-old sibling has been charged with murder and is currently in custody in the Montgomery County Juvenile Detention Facility,” Lt. Scott Spencer of the sheriff’s office said in a statement on Sunday.The name of the juvenile charged in the case was not released; the boy who died wasn’t named, either.Spencer said police were called to a home in Conroe about 2:40 p.m. local time on Saturday and found the young victim suffering from a single bullet wound to the chest. He said the boy was taken to a local hospital, where he died.Sheriff’s officials declined to say where the juvenile homicide suspect obtained the weapon.The shooting marked at least the third time in seven months that a child 12 years old or younger has been investigated in a homicide in the United States.In January, a 12-year-old Texas boy was charged with capital murder in the fatal shooting death of a professional boxer.The victim, 24-year-old John VanMeter, was found in his Uvalde, Texas, home, west of San Antonio, shot in the head.VanMeter’s girlfriend found the man’s body and called 911 to report someone had broken into their home and shot VanMeter in the head, according to the Uvalde Police Department.In November, an 11-year-old boy shot and killed his grandmother and took his own life in their Arizona home after he was told to clean his room, authorities said.The violent incident occurred in Litchfield Park, Arizona, a suburb of Phoenix, and was witnessed by the child’s grandfather, whose gun was used in the tragedy, according to the Maricopa County Sheriff’s Office.