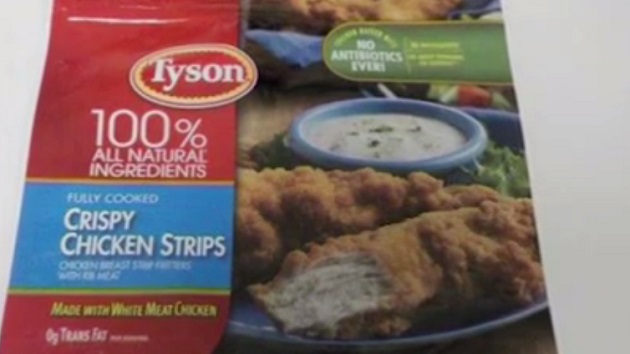 (NEW YORK) — Tyson Foods is massively expanding a previous recall for its brand of frozen, ready-to-eat chicken strips due to consumers finding pieces of metal in them. The company issued a recall for 69,093 pounds of chicken strips on March 21, but it is now expanding that to 11,829,517 million pounds, according to the U.S. Department of Agriculture’s Food Safety and Inspection Service.The recall was announced on Saturday.The FSIS had initially received two complaints of “extraneous material” in the chicken, but it has now received six complaints. There have been three oral injuries due to people biting into the chicken strips contaminated with metal pieces.The strips were produced between Oct. 1, 2018 and March 8, and have “Use By Dates” of Oct. 1 through March 7, 2020. Establishment number P-7221 appears on the back of the packaging.The packages should be thrown out or returned to the store where they were bought.The recall includes crispy chicken strips, buffalo-style chicken strips and honey BBQ-flavored chicken strips.In addition to Tyson-labeled chicken, the product is also sold under several store brands, including Associated Wholesale Grocers’ Best Choice brand, Walmart’s Great Value brand, Food Lion, Meijer, Publix, Hannaford, Aldi’s Kirkwood brand and Tyson’s Spare Time brand.The recall is classified as Class I, meaning there is a “high” health risk.Questions can be directed to Tyson’s customer service line at 1-866-886-8456.