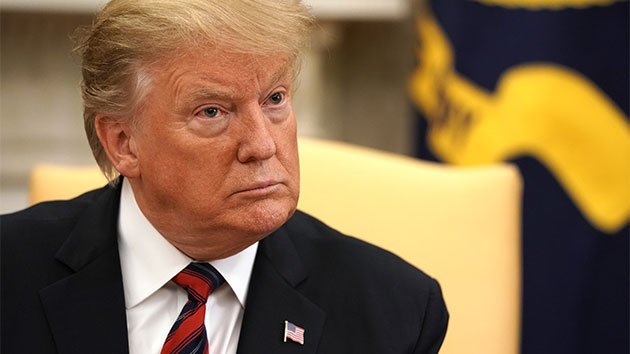 Chip Somodevilla/Getty Images
Posted on May 4, 2019 by ABC News

Trump tweeted on Friday afternoon that he was monitoring “censorship” by social media platforms, adding: “This is the United States of America -– and we have what’s known as freedom of speech! We are monitoring and watching, closely!!”

Over the next day, Trump retweeted complaints about Facebook’s recent social media ban from people like Paul Joseph Watson, who has helped promote conspiracy theories that 9/11 was an inside job and was banned from Facebook, and Lauren Southern, who claims that immigrants and Islam “screwed” her generation.

The president also tweeted about James Woods, a Hollywood actor whose Twitter account was suspended for tweeting “If you try to kill the King, you better not miss. #HangThemAll” in response to the Mueller report.

The president tweeted: “How can it be possible that James Woods (and many others), a strong but responsible Conservative Voice, is banned from Twitter?” Trump tweeted while returning from his golf club in Virginia. “Social Media & Fake News Media, together with their partner, the Democrat Party, have no idea the problems they are causing for themselves. VERY UNFAIR!”

The president’s son Donald Trump Jr. also chimed in, and tweeted: “the media won’t be happy until anyone to the right of @CNN is banned from having a voice. And let’s not pretend this is just about social media either, leftists are already pressuring web-hosting sites, banks & credit card companies to ban people they disagree with politically.”

Republicans on Capitol Hill have spent more than a year holding hearings over what they claim is bias against conservative news and viewpoints, even suggesting the censorship of some political speech raises antitrust issues. But tech companies say it’s not about political speech, but rather speech that incites violence or hate.

The president, seeming to side with those who were banned from Facebook, shared content from conspiracy theory website InfoWars, which has attacked the parents of Sandy Hook Elementary School shooting victims, and a video from an account called @DeepStateExposed that shows video of a Muslim man saying that Americans should become Muslims or die.

Trump most recently met with Twitter CEO Jack Dorsey at the White House where he reportedly complained about losing Twitter followers and talked about social media, and some of its regulations.