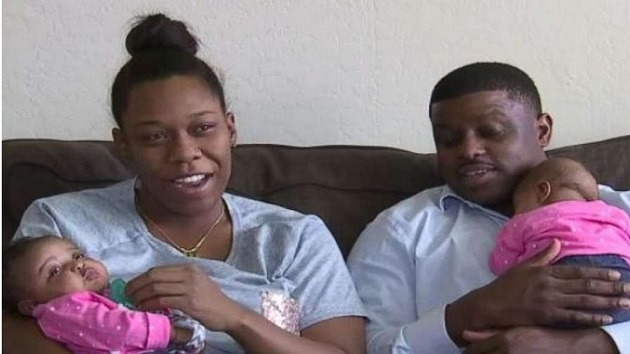 (PHOENIX) — Derrick and Monique Rodgers say they weren’t looking for much after he captured hospital staff dropping their newborn baby on its head moments after birth. An apology would have sufficed.Instead, Chandler Regional Medical Center in Arizona has given them the runaround and they decided to share the video publicly.The couple’s twins, Morgan and Madison, were born premature on Valentine’s Day. Just moments after Morgan’s birth, Derrick Rodgers filmed a member of the medical staff dropping the baby on her head on a table. Another staffer quickly grabbed the child to prevent her from falling on the floor.”It made me so mad. Like, I had to stop recording,” Derrick Rodgers told Phoenix ABC affiliate KNXV.The incident was literally just a few seconds, but the baby’s mother said she promised herself she “would never watch that video again.”The twin girls are both home and there are no serious concerns about Morgan’s health, according to their parents.Derrick Rodgers said he later approached the doctor, but he ignored his concern.”I told him, ‘You dropped my baby,"” he said, recalling the encounter in an interview with KNXV. “He had like a nonchalant look on his face. Then I showed him the video, and he had nothing to say after that.”The family did not even receive an apology from Chandler Regional Medical Center.”An apology when it happened could’ve gone a long way,” said Monique Rodgers.They later found out Morgan was given an ultrasound and had suffered a germinal matrix hemorrhage (GMH), or bleeding in the brain. The Rodgers, who have two older children, weren’t told of the ultrasound until six weeks after it was taken, they said.GMH is not uncommon in babies born prematurely and it may have had nothing to do with the drop.Still, the couple worries about shaking the baby has developed and have made plans to see a neurologist.”I feel like she was treated like a sack of potatoes,” Monique Rodgers said.The hospital cannot comment publicly on the incident due to the Health Insurance Portability and Accountability Act (HIPAA), but did say it took the incident “extremely seriously.””Because of patient privacy laws and a request from the family not to release information, we are unable to comment specifically on this matter,” Chandler Regional Medical Center said in a statement to KNXV. “The safety of our patients and their families is always our top concern. The medical team at Dignity Health Chandler Regional Medical Center takes this matter extremely seriously and is working to conduct a comprehensive review.”

Trump plans to leave in dramatic fashion yet continues to stay out of sight
Survey says 60% consider themselves “total film buffs” thanks to pandemic binge-watching
Coronavirus live updates: California calls for pausing use of Moderna vaccine lot
‘WandaVision’ star Paul Bettany on his father’s struggle to come out of the closet
In scathing draft of letter never made public, Trump chided James Comey for ‘erratic,’ ‘self-indulgent’ conduct
Baby with rare disease survives COVID-19, liver transplant before his first birthday