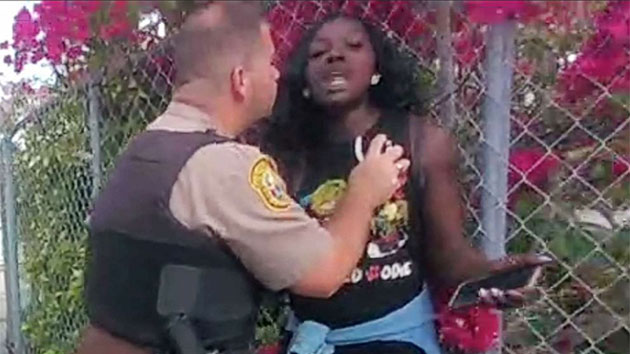 Miami-Dade Police Department
Posted on May 4, 2019 by ABC News

(MIAMI) —  A Miami-Dade police officer was charged this week for forcefully arresting a woman, and then making false statements about what happened, in an incident that sparked outrage after video of the incident went viral.

Police bodycam footage and a cell phone video recorded by the woman’s friend showed the officer, Alejandro Giraldo, pushing Dyma Loving against a fence before grabbing her by the neck and pulling her to the ground.

Giraldo had been responding to a 911 call made by Loving’s friend, Adrianna Green, to report that a neighbor had threatened them with a shotgun. An internal police investigation later found there was no basis for arresting Loving.

Giraldo was arrested on Thursday and charged with official misconduct, a felony, for making false statements in official reports. He was also charged with battery.

“After taking the sworn statements…and reviewing all the known video evidence, we believe that there is sufficient evidence to charge a violation of Florida’s criminal statutes,” the Miami-Dade State Attorney’s Office said in a statement.

On the morning of March 5, Green called 911 to say that her neighbor had been hurling racist insults at her, and that he had pulled out a shotgun and threatened to shoot her. Four officers reported to the scene and interviewed Green and Loving about the incident before going to the neighbor’s home to interview him about the allegations.

They told Loving and Green “not to go anywhere,” the warrant said.

It was at this point that Giraldo and a sixth officer, Juan Calderon, arrived at the scene and arrested Green.

Giraldo said he made the arrest because Loving “would not obey commands,” was “uncooperative,” and was “screaming at us, causing a scene in a residential neighborhood,” according to the police report. None of these statements, however, could be backed by evidence, officials said.

In sworn statements, each of the officers said that Loving did not in fact speak aggressively or act in a way that could have been perceived as a threat to the officers’ safety, the police report said.

Loving’s attorney, Justin Moore, said that Loving had “expressed relief” over Giraldo’s arrest, and applauded prosecutors for moving forward with the case. But he said that other officers should also face charges for their role in the incident.

“The fact is that the other officers involved in Dyma’s arrest assisted Officer Giraldo and drafted police reports detailing the incident,” Moore said. “It is more than reasonable that they meet the same scrutiny that Officer Giraldo has received.”

Miami-Dade Police Department Director Juan Perez called Giraldo’s arrest disappointing and said it “overshadows the hard work of the dedicated men and women of law enforcement, who strive daily to serve and protect our community,” according to a statement.“This particular case underscores our commitment to cooperate and work together with the Miami-Dade State Attorney’s Office in our continued effort to hold ourselves accountable,” the statement said.Andre Rouviere, Giraldo’s defense attorney, expressed concerns regarding the nature in which the case was brought about in a statement provided to ABC News. “Of the 35 body worn cameras and videos that were available, the media was shown only a small handful in which to present to the public,” he said, claiming that the State Attorney’s Office succumbed to “the pressure of a signature gathering campaign pushing for the filing of charges against Officer Giraldo.””As a result of the pressure and rush to judgement, Officer Giraldo has already been convicted by the state attorney’s office, his own Police Department, the media and the public,” Rouviere said. “One would hope by the time the matter goes to court, Officer Giraldo will, as any accused, be cloaked in a presumption of innocence.”

Giraldo has since been released from jail, according to ABC Miami affiliate WPLG-TV.