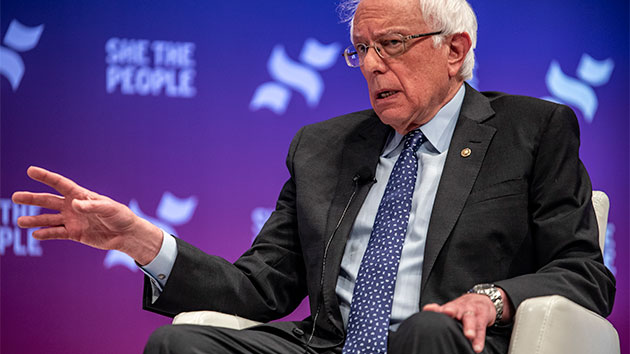 Sergio Flores/Getty Images
Posted on May 4, 2019 by ABC News

(WASHINGTON) — Sen. Bernie Sanders, one of the early front-runners in the 2020 Democratic presidential field, said Saturday that President Donald Trump’s handling of North Korea is one area where he doesn’t “fault” the current commander-in-chief.

Speaking to ABC News’ Chief White House Correspondent Jonathan Karl in an exclusive interview for “This Week,” the Vermont senator said that Trump meeting face-to-face with North Korean leader Kim Jong Un “is the right thing to do.”

Karl asked Sanders how he would respond as president to the apparent launch of unidentified short-range projectiles by North Korea into the Sea of Japan Friday night.

“You know, this is one area, actually, where I do not fault Trump. I think the idea of sitting down with Kim Jong Un is the right thing to do. It is very, very difficult, but clearly they are a threat to the planet,” Sanders said. “They are isolated. They’re demagogic, and we have just got to do everything we can to have China and the people in the Pacific Rim put as much pressure on North Korea and make it clear that they cannot continue to act this way.

“It is not an easy situation,” he added.

The 2020 hopeful said he believes the United States needs to “put all of the pressure that we can” on North Korea, both economically and politically.

“Anything in this very interesting world is possible,” the president tweeted. “But I believe that Kim Jong Un fully realizes the great economic potential of North Korea, & will do nothing to interfere or end it. He also knows that I am with him & does not want to break his promise to me. Deal will happen!”