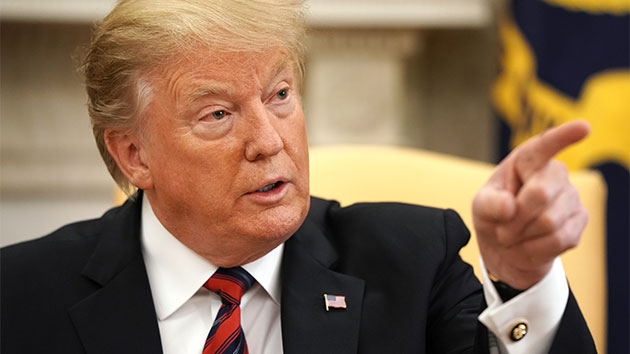 Chip Somodevilla/Getty Images
Posted on May 3, 2019 by ABC News

(WASHINGTON) — President Donald Trump on Friday said he and Russian President Vladimir Putin discussed special counsel Robert Mueller’s investigation into Russian meddling in the 2016 election – but the issue of Russia’s continued interference efforts did not come up in the hour-long phone conversation.

“We discussed, he sort of smiled when he said something to the effect that it started off as a mountain and it ended up being a mouse, but he knew that, because he knew there was no collusion whatsoever, so pretty much that’s what it was,” Trump said the two leaders’ discussion of the special counsel’s probe.

Though the special counsel’s report did not establish a conspiracy between the Trump campaign and Russia, Mueller’s investigators concluded that Russia had engaged in a sustained campaign to disrupt the 2016 election.

The president appeared to grow agitated when a reporter questioned him on whether he had warned Putin against interfering in future elections.

“Mr. President, did you tell him not to meddle in the next election?” a reporter asked.

“Excuse me, I’m talking, I’m answering this question. You are very rude. So we had a good conversation about several different things,” Trump said.

When another reporter pressed again on whether he warned Putin against future interference, Trump replied: “We didn’t discuss that.”

The call comes as President Trump continues to face fallout following Mueller’s probe and amid growing calls for Attorney General William Barr to resign for his handling of the report.

When asked by reporters if he would like to see Mueller testify before Congress about the report’s findings and handling of its release, Trump said that’s up to the attorney general.

President Trump tweeted the conversation was “very good,” adding “as I have always said, long before the Witch Hunt started, getting along with Russia, China, and everyone is a good thing, not a bad thing.”

The two leaders disagreed on who should hold the power in Venezuela with the Trump administration backing opposition leader Juan Guaido in his effort to oust Nicolas Maduro, the socialist president supported by the Russian government.

According to the White House, the president reiterated several times on the phone call with Putin his focus to stand with the Venezuelan people as the country is embattled by mass protests.

But in a translated statement from the Kremlin: “the Russian president stressed that only the Venezuelans themselves have the right to determine the future of their country.”

The leaders also discussed trade and a potential nuclear agreement including China but spent a “good bit of time” focused on the push for North Korean leader Kim Jong Un to denuclearize.

“The president said several times on this front as well – the need and the importance of Russia stepping up and continuing to help and put pressure on North Korea to denuclearize,” Sanders said.

The Kremlin noted in their statement, “both sides noted the importance of consistently moving along the path of denuclearization and achieving long-term normalization on the Korean Peninsula.”

The Russian statement did not reference the Mueller report or the special counsel investigation.