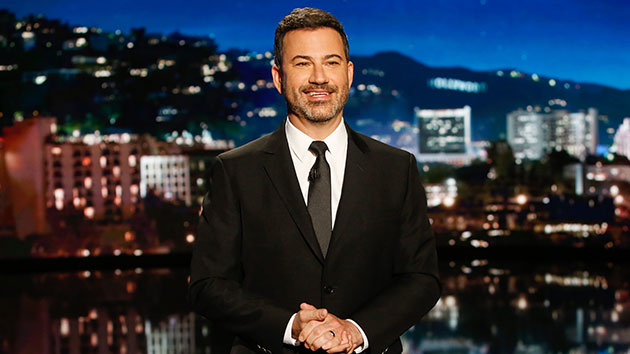 With Brady supposedly appearing to promote his book, The TB12 Method, partway through the interview Kimmel wanted to test the arm of the 41-year-old, six-time Super Bowl winner to see if it’s as strong as ever.  Not wanting to throw a football indoors, Jimmy, Tom and Guillermo instead piled into a taxi that took them to “223 Liberace Lane” — a reference to the 2013 TV movie Behind the Candelabra, in which Damon played the late entertainer and pianist Liberace’s lover opposite Michael Douglas.

At their destination, a modest house on a suburban street, Kimmel challenged Tom to throw the ball through the home’s upstairs window. Tom obliged, shattering the glass with a perfect spiral.

That’s when homeowner Damon came running out, wearing a We Bought a Zoo t-shirt — the 2011 Damon film that Kimmel delights in mocking.

“Do you live here?” Jimmy sheepishly asked his pretend nemesis. “You know I live here!” said the incensed Damon before recognizing it was Brady who threw the football.

Matt handed Jimmy his phone to take his picture with the NFL great, but Kimmel didn’t oblige, instead throwing the phone through another window and then claiming, “It was an accident!”

Tom, Jimmy and Guillermo piled back into their ride to drive back to the studio, but not before the cab hit reverse, running over Damon’s mailbox.