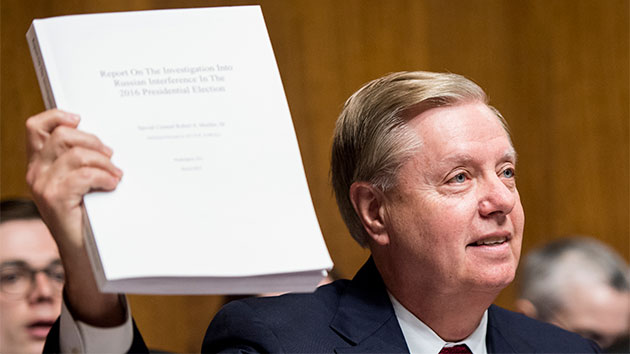 (WASHINGTON) —  Senate Judiciary Committee Chairman Lindsey Graham wrote to special counsel Robert Mueller on Friday, offering him the chance to “provide testimony” regarding any misrepresentation he thinks Attorney General William Barr may have made about a phone call between the two men after Barr released a summary of Mueller’s and his own conclusions on March 24.

It’s unclear whether Mueller would testify in person, or provide written testimony for the record. On Wednesday, Graham indicated he would have Mueller “come in” to provide testimony if the special counsel desired.

After Barr sent a four-page letter to Congress outlining his primary conclusions of the report, Mueller wrote Barr a letter on March 27 objecting to the way the report was being characterized in the news media. Mueller complained that the initial four-page summary of the probe’s findings led to “public confusion about critical aspects of the results of our investigation.”

Barr testified at the Senate Judiciary Committee on Wednesday that he and Mueller spoke on the phone after he received Mueller’s letter, and the special counsel reiterated that the press coverage surrounding the investigation was misleading, though he did not complain about Barr’s conclusions.

“In response to questions by Senator Blumenthal, the Attorney General testified in essence that you told him in a phone call that you did not challenge the accuracy of the Attorney General’s summary of your report’s principal conclusions, but rather you wanted more of the report, particularly the executive summaries concerning obstruction of justice, to be released promptly,” Graham, R-S.C., wrote. “In particular, Attorney General Barr testified that you believed media coverage of your investigation was unfair without the public release of those summaries.”

“Please inform the Committee if you would like to provide testimony regarding any misrepresentation by the Attorney General of the substance of that phone call,” Graham added.

Graham had previously indicated he does not intend to hold a public hearing with Mueller, though he signaled he’d allow Mueller to clarify the issue in writing.

“So here’s what’s gonna happen next,” Graham said Wednesday. “I’m going to write Mr. Mueller a letter and I’m gonna ask him if he has any dispute with what Mr. Barr said about the conversation that was just described with Senator Blumenthal. Give him a chance to correct the record if he thought Attorney General Barr in any way misrepresented the findings of his report. And that will be it.”

The House Judiciary Committee is also seeking a public hearing with Mueller, as soon as May 15, though a date has not been finalized as the panel works with the special counsel’s office to finalize details.

President Donald Trump told reporters Friday that it will be up to Barr to determine whether Mueller is permitted to testify on the Russia investigation. Barr has said he has no objections to Meuller testifying.