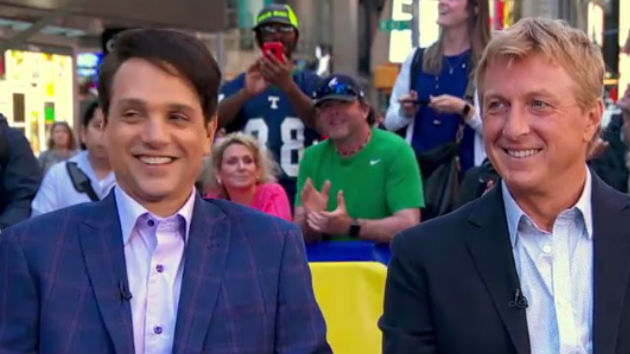 (NEW YORK) — Season two of Cobra Kai premiered a week ago and is now streaming on YouTube Premium, with news Thursday that the series has been renewed for a third season.

Based on the iconic 1984 movie The Karate Kid, Cobra Kai stars Ralph Macchio and William Zabka, reprising their respective roles as underdog Daniel LaRusso and bully Johnny Lawrence, respectively, from the original film.

Why does Macchio think their characters still connect with people, three decades later?

“It works on a human level,” he tells ABC Radio. “Whether you were the kid who was bullied, or the product of a single-parent household or you moved to a different town, it hits on all those elements that people deal with today. So it’s timeless in that respect.”

Another key to Cobra Kai’s popularity, says Zabka, was their decision to move on from the original film and its many sequels.

“It’s not just leaning on the nostalgia, and on what we call the low-hanging fruit,” he tells ABC Radio. “A lot of people haven’t seen the film and they are coming in just watching the show and discovering the film backwards. So it works on its own.”

A particular moment in this season’s first episode provided an emotional moment for Macchio, when his character returned to the home of his mentor and sensei from the original movies: Mr. Miyagi, played by the late Pat Morita.

“It took me back to that time and the magic that Pat Morita and his performance created for this movie franchise and show,” says Macchio. “It also reminded me that now I’m the old guy teaching young kids!”