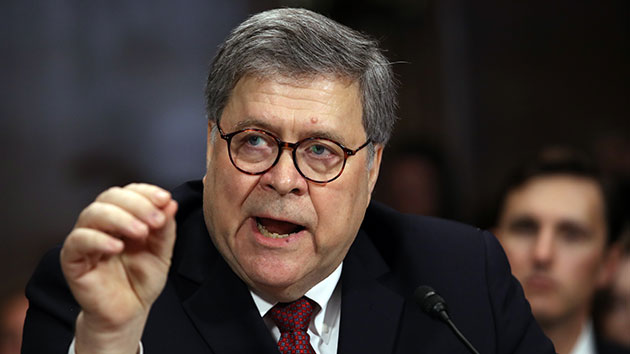 Win McNamee/Getty Images
Posted on May 3, 2019 by ABC News

(WASHINGTON) — During his four-hour back-and-forth with senators on Wednesday, Attorney General William Barr questioned, and at times seemed to contradict, key findings in special counsel Robert Mueller’s report.Time and again, faced with questions from probing Senate Judiciary Committee Democrats about the report’s contents, Barr also seemed unfamiliar with some of the report’s significant details.When Sen. Cory Booker, D-N.J., brought up how then-Trump campaign manager Paul Manafort shared polling data in August 2016 with his former business associate, Konstantin Kilimnik — identified by prosecutors as having ties to Russian intelligence — Barr struggled.”What information was shared?” Barr asked, prompting Booker to reply, “Polling data was shared, sir. It’s in the report.””With who?” Barr followed up.The special counsel’s team had concluded there weren’t sufficient grounds to prosecute Manafort’s actions as a crime of conspiracy, but a top prosecutor in Mueller’s office previously described Manafort’s interactions with Kilimnik as being at the “heart” of the probe about whether Trump’s campaign had coordinated with the Russian government.In another instance, when Sen. Patrick Leahy, D-Vt., quoted the Mueller report about “multiple links between Trump campaign officials and individuals tied to the Russian government” and that in some instances “the campaign was receptive to the offer, whereas others they were not,” Barr indicated that he did not understand “what communications that referred to.”Leahy said, “You have the report. I just gave you the page from the report.”At another point, Leahy questioned if Trump had “fully cooperated” with Mueller, as Barr wrote, “by instructing a former aide to tell the attorney general to un-recuse himself, shut down the investigation and declare the president did nothing wrong.””Where is that in the report?” Barr asked. When Leahy pointed to the page number, Barr muttered, “Right.”At other times, the attorney general appeared to directly contradict key findings in the Mueller report, including when giving his view of the interactions between Trump and then-White House Counsel Don McGahn about the president’s attempts to get rid of Mueller.During questioning by Sen. Dianne Feinstein, D-Calif., Barr stated that Trump had attempted to remove Mueller because of “conflict of interest” and not to terminate the investigation. He said the president had directed McGahn to correct a New York Times article that reported on what Trump had told McGahn only because he deemed it inaccurate.According to the Mueller report, however, evidence showed that “the president was not just seeking an examination of whether conflicts existed but instead was looking to use asserted conflicts as a way to terminate the special counsel.” The Mueller report also stated, “There is also evidence that the president knew that he should not have made those calls to McGahn.””The report is over 400 pages,” a Justice Department official told ABC News. “It would be impossible for anyone to remember every detail of the report off-hand.”Asked whether Barr’s testimony contradicted Mueller’s findings, the Justice Department official answered, “No.”Maybe one of the most contentious moments came when Democratic Sen. Kamala Harris asked Barr if he, Deputy Attorney General Rod Rosenstein or anyone in his executive office had questioned or reviewed the underlying evidence supporting the report’s findings, and Barr replied, “No.””In the Department of Justice, we have cross memos every day coming up,” Barr said. “We don’t go and look at the underlying evidence. We take the characterization of the evidence as true.”Harris shot back, questioning Barr’s decision to accept charging recommendations without reviewing underlying evidence when making a “critical decision” about “the person who holds the highest office in the land and whether or not that person committed a crime.””I think you’ve made it clear, sir, that you have not looked at the evidence and we can move on,” Harris said. Copyright © 2019, ABC Radio. All rights reserved.