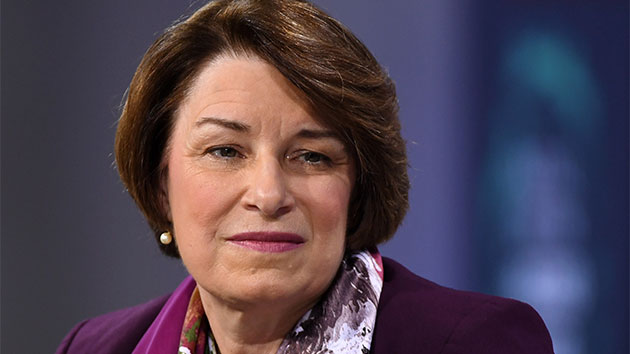 Ethan Miller/Getty Images
Posted on May 3, 2019 by ABC News

(WASHINGTON) — Democratic White House hopeful Amy Klobuchar rolled out the first major policy proposal of her 2020 bid on Friday: a plan to invest $100 billion over a decade to combat drug and alcohol addiction and improve mental health services, care and prevention.

At the heart of making this one of her first detailed proposals of her candidacy is the Minnesota senator’s personal connection to the problem of addiction. Her father struggled with alcoholism for years, which she acknowledged candidly amid one of the highest-profile political battles in recent history: the confirmation hearings of now-Supreme Court Justice Brett Kavanaugh.

“My own story is like a lot of families’ stories — my dad struggled with alcoholism when I was growing up,” Klobuchar said in a statement Friday. “I love my dad. I saw him climb the highest mountains but also sink to the lowest valleys because of his battle. After three DWIs, he finally got real treatment and was, in his own words, ‘pursued by grace."”

“I believe everyone should have the same opportunity my dad had to be pursued by grace and get the treatment and help they need,” she added.

The sweeping plan seeks to address substance abuse and mental health disorders, which the Democratic candidate notes in a Medium post, “do not discriminate.”

“Nearly half of Americans have a family member or close friend who’s been addicted to drugs. And 1 in 5 Americans experiences a mental health condition,” she writes in the Friday post.

Klobuchar’s rise to presidential contender could be pinpointed to one of the most memorable moments of Kavanaugh’s hearing when Klobuchar, who sits on the Senate Judiciary Committee, squared off with him over whether he had ever blacked out from drinking. Kavanaugh had been accused by Christine Blasey Ford, a California professor, of being drunk and trying to sexually assault her when they were teenagers in the 1980s. But the nominee then flipped the question on her asking if she had ever blacked out.

He later apologized for the question, and Klobuchar responded, “I would like to add when you have a parent that’s an alcoholic, you’re pretty careful about drinking.”

After the hearing, speculation emerged about whether the former prosecutor would join the impending race for the nation’s highest office. Klobuchar formally joined the burgeoning 2020 field in February.

Turning her attention to the substance of her platform, Klobuchar divided her detailed plan into three buckets: prevention and early intervention, treatment and justice, economic opportunity and ongoing recovery.

As part of prevention, Klobuchar seeks to expand funding for state and local communities to “detect and respond to mental health conditions,” which would include funding mental health programs at schools, training for doctors to recognize early warning signs, and launching a national suicide prevention campaign.

Klobuchar said, as president, she would tackle treatment by expanding access to mental health and recovery services, particularly for opioid addiction, in underserved communities, launch a national awareness campaign to fight stigma associated with addiction and mental health, expand health care coverage for these conditions by renewing enforcement of the Affordable Care Act the Wellstone-Domenici Mental Health Parity Act that she helped pass, and infuse research efforts with more money.

She also aims to prioritize mental health and substance abuse treatment over jail for non-violent offenders, increase federal support for drug and mental health courts to promote treatment over incarceration, better train law enforcement on crisis intervention, including equipping first responders with life-saving naloxone, and support reintegration for those recovering from addiction or re-entering society after incarceration.

Klobuchar also takes direct aim at opioid manufacturers, signaling her urgency to tackle the widespread opioid crisis, by instituting a 2-cent fee on each milligram of active opioid ingredient in prescription drugs created by the manufacturers. She said this will pay for her plan.

But she isn’t the first presidential candidate to introduce a platform to confront mental health. Earlier this week, former Maryland Congressman John Delaney, one of the earliest competitors to enter the 2020 contest, released a plan “to address the inadequacy of our mental health record.”

Klobuchar is poised to test out her plan on the campaign trail during a stop in Detroit, when she speaks at the National Organization of Black County Officials economic development conference, before stumping in Iowa this weekend.