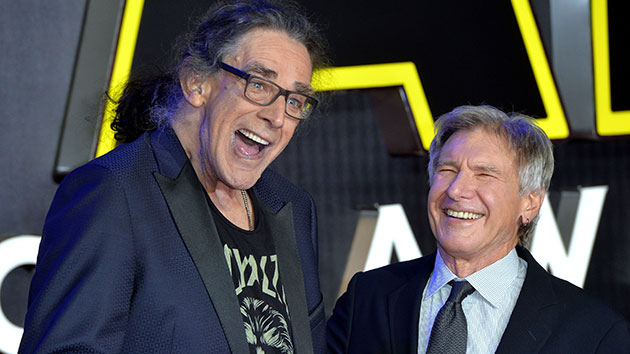 Peter Mayhew with Harrison Ford at the 2015 London premiere of "Star Wars: The Force Awakens"; Anthony Harvey/Getty Images
Posted on May 2, 2019 by ABC News

(NEW YORK) — Peter Mayhew, the actor best known for originating the role of Chewbacca in the Star Wars films, has died at age 74.

“The family of Peter Mayhew, with deep love and sadness, regrets to share the news that Peter has passed away. He left us the evening of April 30, 2019 with his family by his side in his North Texas home,” reads a message on Mayhew’s official Twitter.

Star Wars co-star Mark Hamill, who played Luke Skywalker, called 7′ 4″ Mayhew “the gentlest of giants — A big man with an even bigger heart who never failed to make me smile & a loyal friend who I loved dearly,” adding that he’s “a better man for just having known him.”

In a statement, Harrison Ford, who as Han Solo arguably shared more screen time with Mayhew than any other Star Wars actor, called him “a kind and gentle man, possessed of great dignity and noble character.”

“These aspects of his own personality, plus his wit and grace, he brought to Chewbacca,” Ford’s statement goes on.  “We were partners in film and friends in life for over 30 years and I loved him. He invested his soul in the character and brought great pleasure to the Star Wars audience.”

Star Wars creator George Lucas issued a statement calling Mayhew “a wonderful man.  He was the closest any human being could be to a Wookiee: big heart, gentle nature…and I learned to always let him win.  He was a good friend and I’m saddened by his passing.”

Actor Billy Dee Williams, who will reprise his original trilogy role of Lando Calrissian in Star Wars: The Rise of Skywalker this December, tweeted: “Much more than Chewie to me…My heart hurts…I will miss you my dear friend…thanks for the great memories!”

As a more complete statement from the family explains, Mayhew starred as Chewbacca in the original Star Wars trilogy, one of the prequels and more.  Ultimately, his advancing age and declining health meant the role went to Finnish actor Joonas Suotamo, who tweeted that he was “devastated” by news of Mayhew’s passing, calling him a “dear friend and mentor …He was an absolutely one-of-a-kind gentleman and a legend of unrivaled class and I will miss him.”

As the story goes, Mayhew was working as an orderly in London’s King’s College Hospital in while George Lucas was preparing to shoot parts of 1977’s Star Wars at nearby Elstree Studios.  Mayhew reportedly said all he had to do was stand up for Lucas to give him the role, which he played in the original trilogy and two other Star Wars feature films, the last being 2015’s Star Wars: The Force Awakens.

Mayhew had few acting roles outside of the Star Wars family and related projects.  According to his family, memorial plans are set for June 29 and there will be a memorial planned later this year in Los Angeles for fans.

Mayhew is survived by his wife Angie and their three children.