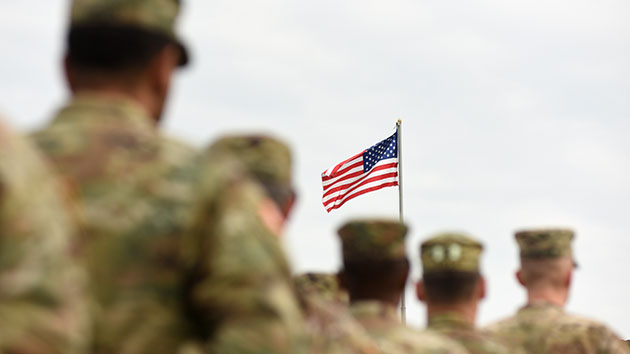 (WASHINGTON) — In a setback for the U.S. military’s efforts to reduce sexual assault in the military, a new Pentagon survey obtained by ABC News shows the number of sexual assaults increased in 2018 to 20,500, almost the same levels as five years ago, a result that Pentagon officials say will lead to changes in its sexual assault prevention efforts.The latest figures are included in an anonymous Pentagon survey conducted every two years that estimates the “prevalence,” or rate, of sexual assault in the military. Sexual assault is defined as rape, sexual assault, forcible sodomy, aggravated sexual contact, abusive sexual contact and attempts to commit those offenses.In 2016, Pentagon officials were encouraged by the significant drop in the estimate of sexual assaults to 14,900 in that year’s survey, but they now acknowledge that they will have to adjust their prevention efforts in light of the new report.This year’s survey found that the number of estimated sexual assaults had risen to 20,500, almost the same number of 20,300 estimated in the 2014 survey.The survey found that female service members between the ages of 17 and 24 are at the greatest risk for sexual assault from their peers, a trend in line with another report released earlier this year that showed a significant spike in sexual assaults at the three military service academies.”It’s extremely disheartening,” said Dr. Elizabeth Van Winkle, the executive director of the Office of Force Resiliency for the Defense Department. “These are our youngest service members, and it is extremely frustrating because we’ve been working at this for a really long time.””While we do have indications of progress in some areas, this is not the direction that we want to go,” said Van Winkle. “So we have to adjust course.”She described the data from the new survey, as well as the military service academy report, as a “wake-up call” that 17- to 24-year-olds in military services are “a group that we have not yet reached in terms of our strategies.””This is the trip wire,” said Nate Galbreath, deputy director of the Defense Department’s Sexual Assault Prevention and Response Office. “This is what tells us that there’s something going on that we need to hone in on. And so now that we have our trip wire set off and we’ve got a higher prevalence for women 17 to 24, we’re going to be focusing very, very tightly on that.”But while there will be an increased focus on 17- to 24-year-olds in military services, “we cannot take our eye off of any of the targeted areas that we have been looking at across the board,” said Van Winkle. “We continue to drive that message for our senior officers that they are responsible for setting the command climate.”This year’s survey also found increases in sexual harassment and gender discrimination, patterns of behavior that can be precursors to sexual assault.”We continue to struggle with maintaining a climate that meets our expectations for good order and discipline and treating everyone with dignity and respect,” said Van Winkle.Accordingly, efforts will focus on lower-level leaders, particularly non-commissioned officers, and how they should hold service members in their unit accountable.”Our command climate surveys, for a long time, measured toxic leadership,” said Van Winkle. “What we’re moving towards is that you’re not only accountable for your own behavior, but you’re accountable for true command climate. You are accountable for what’s happening within the peers underneath you.””What we now have to do is we really have to focus down and work with the E5’s (sergeants) and those first-line folks that are right there on the front lines,” said Galbreath. “To be able to say, ‘Here are the tools that you can use to be able to set good order and discipline.”On Wednesday, Acting Secretary of Defense Patrick Shanahan tipped his hand at what the Task Force may have recommended when he told a House panel that “we’re going to criminalize certain activities in this next year to reflect the seriousness that we’re going to take on certain behaviors.”A Pentagon spokesperson later said the Task Force’s recommendations “included actions to enhance commander’s ability to set appropriate command climate.””One recommendation is for the department to take steps to make sexual harassment a stand-alone military crime,” said spokesperson Jessica Maxwell.The Pentagon survey found once again found that retaliation for sexual assault victims stepping forward remains a concern. According to the survey, 64% of service members who reported sexual assaults perceived negative experiences or retaliation associated with their report.Of those, 43% did not meet the legal criteria for retaliation, though that determination may not always indicate a victim’s perception of possible retaliation.”We can’t always take action, in terms of a charge of retaliation. We can’t always take action on that group,” said Van Winkle, “But it’s still our responsibility to make sure everybody’s treating each other with dignity and respect.”Copyright © 2019, ABC Radio. All rights reserved.