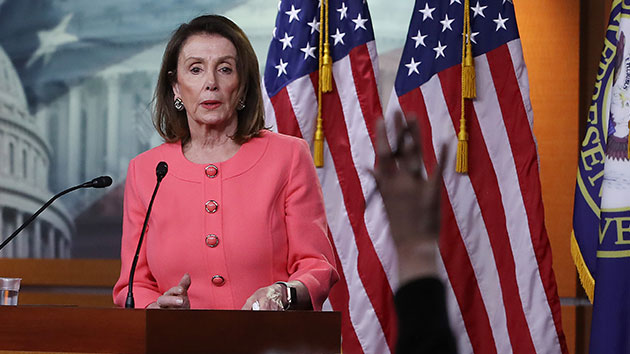 Mark Wilson/Getty Images
Posted on May 2, 2019 by ABC News

(WASHINGTON) — House Speaker Nancy Pelosi accused Attorney General William Barr of committing a “crime” by lying to Congress about his handling of special counsel Robert Mueller’s report, and charged that President Donald Trump has obstructed justice by blocking administration officials from testifying on Capitol Hill.”The attorney general of the United States did not tell the truth to the Congress. That’s a crime,” Pelosi said on Thursday about Barr’s testimony Wednesday to the Senate Judiciary Committee.”He lied to Congress. If anybody else did that, it would be considered a crime,” Pelosi added. “Nobody is above the law. Not the president of the United States and not the attorney general. Being attorney general does not give you a bath to go say whatever you want and it is the fact because you are the attorney general. It just isn’t true.”The Justice Department shot back within minutes.“Speaker Pelosi’s baseless attack on the Attorney General is reckless, irresponsible and false,” Kerri Kupec, a DOJ spokesperson, said in a statement.Pelosi also charged that the president’s resistance to congressional subpoenas amounts to “obstruction of justice.”Asked what consequences she is considering for administration officials who don’t comply with congressional oversight, Pelosi indicated she will follow the lead of her committee chairs, but pointed out that part of President Richard Nixon’s articles of impeachment were derived after he ignored congressional subpoenas.“This is very, very serious. But my judgment will spring from the judgment of our committee chairs,” Pelosi said.Pelosi said that as she watched the hearing, she wondered what motivated Barr “to disrespect the Constitution” and Congress’ power to conduct oversight. Then she said she came to the realization that it’s part of the administration and congressional Republican strategy to fight for special interests that oppose the Democratic agenda.“I really lost sleep last night after watching over and over again the testimony of the attorney general of the United States,” Pelosi said. “How sad it is for us to see the top law enforcement officer in our country misrepresenting, withholding the truth from the Congress of the United States.”“What possible motivation could the attorney general have to dishonor the office that he holds right there for the whole world to see? Then I began to connect the dots,” she continued. “His motivation, his loyalty is not to his oath of office, and it is to Donald Trump.”Copyright © 2019, ABC Radio. All rights reserved.