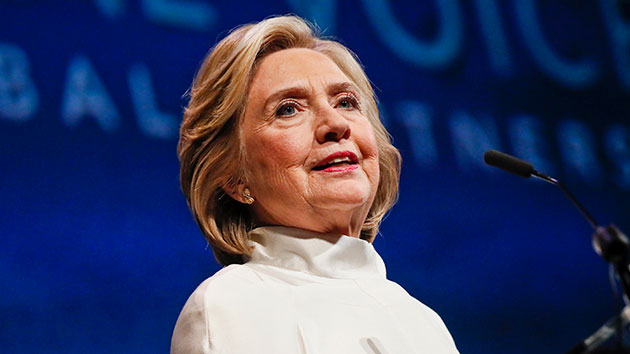 Paul Morigi/Getty Images
Posted on May 2, 2019 by ABC News

(WASHINGTON) — Hillary Clinton said Democrats had rightfully exposed Attorney General William Barr as “the president’s defense lawyer” at his hearing on Capitol Hill Wednesday and that calling for his resignation “makes perfect sense.””I think that the Democrats on the committee did a good job today in exposing that, that he is the president’s defense lawyer. He is not the attorney general of the United States in the way that he has conducted himself,” Clinton said in an interview with MSNBC’s Rachel Maddow Wednesday night. Clinton added that Barr was doing the job the president “hired him to do.””Now, calling for his resignation makes perfect sense, because he’s not discharging the duties of the office,” Clinton said. The interview followed a day of testimony in front of the Senate Judiciary Committee that focused on Barr’s rollout of special counsel Robert Mueller’s findings.Despite the calls for Barr’s resignation, however, Clinton said that was unlikely to happen.”He is not going to resign. And at this point, I think that we know what we need to know about him,” she said, referencing a letter made public just before the hearing that showed Mueller believed Barr’s initial summary to the public “did not fully capture the context” of the special counsel’s investigation.”I think now we need to get into the investigation, because let’s not let Barr be the big shiny object that diverts people’s attention from the two major findings of the Mueller report,” Clinton said, one of which she said was Russia’s “sweeping and systemic interference in our election.””What I learned is that the Russians were successful. I don’t think there is any way to read that report and not conclude they accomplished what they set out to do. They had an objective to sow discord and divisiveness within our society at large, and to help Donald Trump. And they succeeded,” Clinton said.The special counsel’s report did find that the Trump campaign “expected it would benefit electorally from information stolen and released through Russian efforts,” Mueller wrote, though it did not establish members of the campaign “conspired or coordinated with the Russian government in its election interference activities.”Clinton said she’s met with “most of the candidates” running in 2020 to answer questions, and one of her constant warnings has been about foreign interference.”I always tell them, you know, you can run the best campaign. You can be the person who gets the nomination, but unless we know how to protect our election from what happened before and what could happen again, because there is greater sophistication about it, you could lose. And I don’t mean it to scare anybody, but I do want every candidate to understand that this remains a threat,” Clinton said.”I worry a lot that there’s a greater sophistication. They’ve learned some things that they now are going to deploy against us. And us means the country, not just Democrats,” Clinton said.In a moment of sarcasm, Clinton described a hypothetical situation of escalated foreign involvement in 2020 that showed “how absurd” the election climate could be, saying because Trump was not held accountable, other candidates could seemingly also engage with foreign governments.”Imagine, Rachel, that you had one of the Democratic nominees for 2020 on your show, and that person said, you know, the only other adversary of ours who is anywhere near as good as the Russians is China. So why should Russia have all the fun? And since Russia is clearly backing Republicans, why don’t we ask China to back us?” Clinton said.”And not only that, China, if you’re listening, why don’t you get Trump’s tax returns? I’m sure our media would richly reward you,” Clinton said. As is described in Mueller’s report, during a 2016 campaign rally, Trump encouraged Russians “to find the 30,000 emails that are missing” from Clinton. Mueller found that “the Trump Campaign was planning a press strategy, a communications campaign, and messaging based on the possible release of Clinton emails by WikiLeaks.””Now, according to the Mueller report, that is not conspiracy, because it’s done right out in the open,” Clinton said.”So, hey, let’s have a great power contest, and let’s get the Chinese in on the side of somebody else,” Clinton said in jest. “Just saying that shows how absurd the situation we find ourselves in.”Copyright © 2019, ABC Radio. All rights reserved.