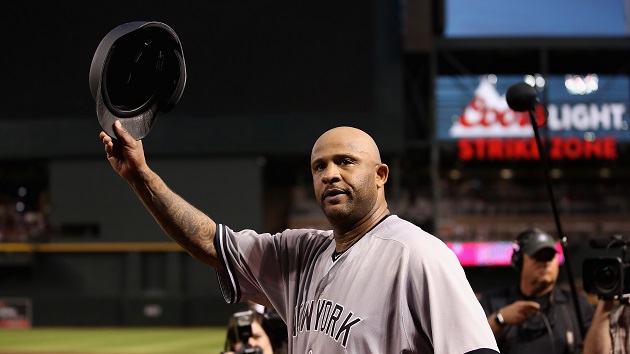 Christian Petersen/Getty Images
Posted on May 1, 2019 by ABC News

(PHOENIX) — As he nears the end of his career, CC Sabathia added to his extensive Cooperstown resume Tuesday night at Chase Field by recording his 3,000th major league strikeout.The milestone strikeout came in the bottom of the second inning of the New York Yankees’ series-opening 3-1 loss to the Arizona Diamondbacks. Sabathia got catcher John Ryan Murphy swinging at a changeup as he struck out the side.Sabathia is the 17th pitcher in big league history, and the third lefty, to reach 3,000 strikeouts.”When I actually got that last strike, I didn’t want it to be Murph,” Sabathia said of the former second-round Yankees draft pick. “Me and him are really close, I’ve been knowing him his whole career.”Sabathia and Murphy played together in the Bronx from 2013 to 2015, with Murphy having caught Sabathia 15 times.Ahead of Murphy’s at-bat, Sabathia picked up two quick strikeouts in the inning before Diamondbacks second baseman Wilmer Flores hit a two-out solo homer. On the two pitches before the 382-foot blast, many of the 36,352 fans present had been chanting “CC, CC, CC” and “Let’s go, CC.”As Sabathia walked off the mound in the second inning after the momentous inning-ending strikeout, he was met near the Yankees’ first-base side dugout by teammates and coaches who swarmed him with  hugs and handshakes. A graphic also flashed on the center-field video board congratulating Sabathia on reaching the milestone.After Sabathia came back into the dugout, Yankees catcher Gary Sanchez handed him the historic ball.”The experience to catch his 3,000th strikeout is something that I’ll never forget,” Sanchez said through an interpreter.Hall of Famers Bob Gibson and Fergie Jenkins are the only other black pitchers to have amassed 3,000 strikeouts in their careers. Like Sabathia, Gibson and Jenkins are part of the 15-man group of “Black Aces,” a collection of the only black pitchers to have won 20 or more games in a season. The group’s founding member, Don Newcombe, who posted the first of his three 20-win seasons in 1951, died earlier this year.Copyright © 2019, ABC Radio. All rights reserved.