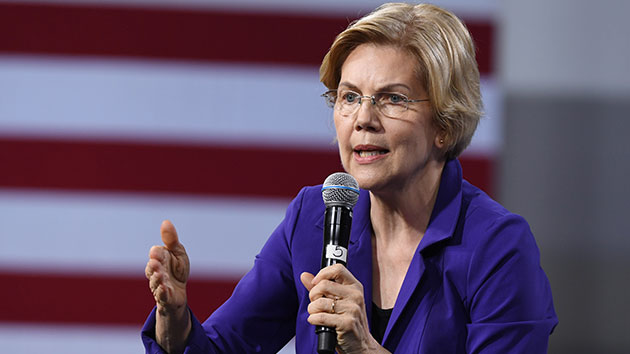 Ethan Miller/Getty Images
Posted on May 1, 2019 by ABC News

(WASHINGTON) — African-American women are three to four times more likely to die from childbirth complications or pregnancy-related issues than white women in America.Elizabeth Warren, the Massachusetts senator and 2020 presidential contender, wants to drastically improve those figures by holding “health systems accountable for protecting black moms.”In an Essence magazine op-ed, the presidential hopeful details her plan of how she intends to improve the structure of the country’s health care system when it comes to the “epidemic” of maternal mortality rates of women of color.Warren initially announced her plan April 24 at the “She the People” presidential forum in Houston.”The data shows that Black women are three to four times more likely than white women to die from pregnancy or childbirth-related causes. This trend persists even after adjusting for income and education,” Warren wrote in her op-ed.The main reason she believes there are high mortality rates for black and brown women? Racism.”These are structural problems that require structural solutions, and as they have so often in the past, Black women and activists are leading the way,” Warren wrote.How black women are treated in the health care systemEarlier this year, ABC News shared the story of Kira Johnson, described by her husband, Charles Johnson, as a healthy, merry, college-educated woman who spoke four different languages.She died at Cedars-Sinai Medical Center in Los Angeles from internal bleeding after giving birth to her second son, Langston. Kira was found with 3 1/2 liters of blood in her abdomen.Johnson knew beforehand that his wife was not well after the scheduled C-section took place, and begged doctors to act. It took them 10 hours.Charles Johnson said his wife was in exceptional health and that she took all the necessary prenatal measures to ensure their second child would be born healthy.A study highlighting racial disparities within America’s middle class from the Brookings Institution determined that black mothers with advanced professional degrees, such as a master’s degree or higher, have a higher chance of infant mortality compared to white women whose highest education level is the eighth grade.Research on the issue conducted by the Centers for Disease Control and Prevention between 2011 and 2014 found that “considerable racial disparities in pregnancy-related mortality exist,” with 12.4 deaths per 100,000 live births for white women compared to 40 deaths per 100,000 live births for black women.In her Essence op-ed, Warren writes “The Alliance for Innovation on Maternal Health is trying to solve this issue developing tools to save lives and stamp out racial disparities.”The proposed solution to racial disparities in health careWarren mentions the plans of two of her Democratic colleagues and 2020 opponents — Sen. Kamala Harris and Sen. Cory Booker — to address the maternal mortality rates of black women.”In Congress, Senator Kamala Harris has a smart proposal to address the structural racism that puts Black women and their babies at risk and improve care coordination,” Warren writes. “Senator Cory Booker has an important bill to expand Medicaid for moms.”Although she praises her colleagues for their proposals, she offers her own solution that she deems more fitting.”I support these efforts, and I have another idea: hold health systems accountable for protecting black moms,” she writes.Warren plans to strategically apply the lessons learned from “successful reforms” enabled by the Affordable Care Act and set one price for the entire “episode” of care a mother needs.If health systems are able to reduce the disparities found in maternal death rates for women of color and increase survival rates, Warren said they will “earn a bonus.” If not, “money will be taken away from them,” Warren said in Houston last week.”I want to talk to the hospitals. … I want to talk to them in a language they understand: money,” Warren said. “I want to see the hospitals see it as their responsibility to address this problem head-on and make it a first priority. The best way to do that is to use money to make it happen.””Paying for better care means both rewarding, excellent health systems and identifying, investing in, and demanding more from struggling ones,” Warren writes in her op-ed, adding, “We’ve done enough observing and debating the effects of bias and racism in our health care system,” Warren said. “It’s time to demand better outcomes.”Copyright © 2019, ABC Radio. All rights reserved.