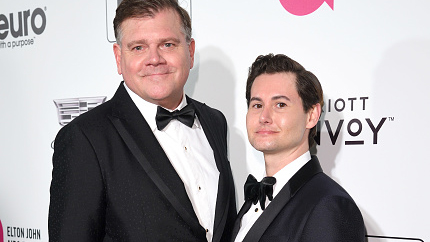 Karwai Tang/WireImage via Getty Images
Posted on May 1, 2019 by ABC News

(NEW YORK) — After coming out and marrying husband Joshua Ross, former NFL star Jeff Rohrer is getting all the love and support he needs, some from unexpected sources.Rohrer, 60, played for the Cowboys three decades ago, and after looking inward and coming to terms with his sexuality, he and his wife of almost two decades, Heather Rohrer, ended their marriage a few years back.But even though that chapter has ended, Jeff and Heather have begun a new one, as co-parents and loving friends. The entire Rohrer clan, including new husband Joshua and Jeff’s two children with Heather — Isabella, 16, and Dondillon, 15 — are living under the same roof.”It’s working out really well so far,” the former athlete tells People magazine for its latest issue.Heather is also very happy with the new blended family.”Jeff and Josh are my family, and we’re a better team together than apart,” she adds.Rohrer could not be true to who he was while in the NFL or even shortly after. He says being gay, “was always inside me. But it was something I managed.”Like she is now, Heather, though she’d be losing her husband, was supportive as soon as the duo started to realize who he really was inside. “Once I figured it out, it was obvious he was gay,” she says. “He thought it was wrong; he was so angry. He thought his children wouldn’t love him, that he’d lose his job … I kept trying to tell him it was okay.”When Rohrer came to terms with his sexuality and started dating Ross in 2015, he was the one who made the effort to meet his love’s ex-wife.”Being together for the kids is the important thing for us,” Heather says. “It’s been difficult to get to this place, but it’s worth it … We’ve decided we may all live together forever.”At the time of their wedding this past November, Ross was overjoyed to be getting a new family with a new husband.”I feel so honored that I’m the one he chose,” he said. “After all this time, for him to like take this big leap — it definitely gives me all the feels. I’m becoming a step-father to two teenage children, so that’s always very exciting.”