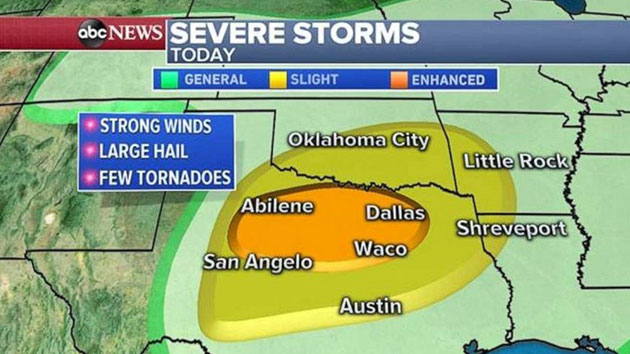 (NEW YORK) — A very slow-moving set of storm systems continues to pummel the central U.S. with severe storms and flooding rain on Wednesday morning.A tornado outbreak triggered 25 tornadoes on Tuesday across five states: Texas, Oklahoma, Arkansas, Missouri and Kansas.Overall, there were 73 damaging storm reports in the last 24 hours from Texas to Illinois with large hail in Illinois, damaging winds up to 65 mph in Oklahoma and heavy rain that caused flooding in Davenport, Iowa.The complex storm system is nearly stationary early Wednesday, stretching from the Great Lakes all the way west into the Rockies. Eight states are under flood alerts from Texas to Michigan.Severe storms will fire up from Texas to Oklahoma and into Arkansas and Louisiana heading into the afternoon and evening hours.The bull’s-eye will be right over northern Texas — from Dallas to Abilene — where we could see a few tornadoes, damaging winds and large hail.With this complex of storm systems not moving much, more rain is expected to fall on already-saturated ground from Texas into the Midwest.Locally, half a foot of rain is possible in northern Texas and into Arkansas. Flash flooding is expected again Wednesday.Copyright © 2019, ABC Radio. All rights reserved.