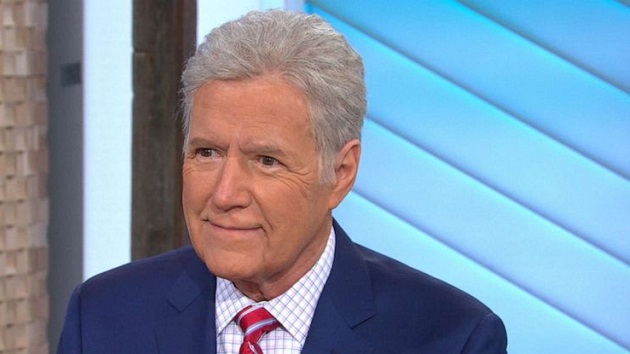 (NEW YORK) — Alex Trebek stopped by Good Morning America Wednesday to update fans on his treatment for stage 4 pancreatic cancer — but also to talk about one of the most exciting runs on Jeopardy ever.Current champ James Holzhauer, setting and breaking the show’s records at an incomparable pace, is making this current season extra “exciting,” Trebek said.Holzhauer topped the $1 million mark last week in record time and now stands at around $500,000 more than that. He has won 19 games in a row and comfortably holds the single-day win record.”It’s exciting, I watch it every night,” Trebek said. In fact, Holzhauer is so impressive that Trebek thinks he could do the once unthinkable:  He has forced me to change a view that I’ve had for many years … that the Ken Jennings record will never be broken,” Trebek said.Holzhauer still has a way to go to beat the 74 wins in a row that made Jennings a Jeopardy legend.Trebek said of Holzhauer, “He has no weaknesses … he has a strategy, he’s a gambler,” referring to the champ’s profession as a sports gambler.Should Holzhauer win in Wednesday night’s episode, he will tie with Julia Collins for the second-longest winning streak in the game’s history at 20 games.In his first live interview since revealing his stage 4 pancreatic cancer diagnosis earlier this year, Trebek also  updated fans on his ongoing health battle.”People all over America have been sharing their good thoughts, their advice, their prayers,” he said. “And I feel it’s been making a difference.”The icon, who has spent 35 years hosting Jeopardy, told cancer survivor Robin Roberts, “It’s great to be considered an inspiration to people.”

In scathing draft of letter never made public, Trump chided James Comey for ‘erratic,’ ‘self-indulgent’ conduct
Giuliani says he won’t represent Trump at president’s impeachment trial
Why Joe Biden’s inauguration will be like no other — and how to watch
PA State Senator Dave Arnold passed away Sunday; flags to fly at half-staff
Shawn Johnson pregnant with baby No. 2 with husband Andrew East
‘Saved by the Bell’ star Dustin Diamond has Stage 4 cancer