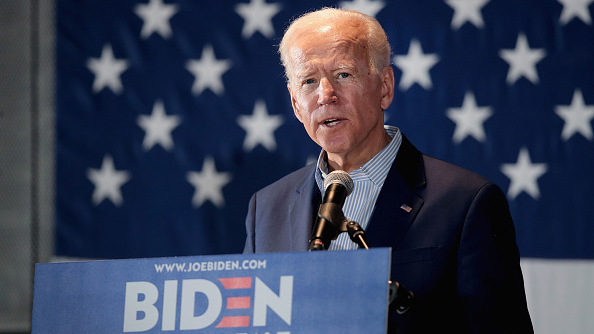 (CEDAR RAPIDS, Iowa) — Former Vice President Joe Biden took his message of rebuilding the middle class to Iowa voters.Scores of voters packed into the Veterans Memorial Building in Cedar Rapids to hear “Middle Class Joe” speak.Biden’s emphasis on organized labor is a significant part of his campaign thus far and he was introduced by a member of the International Association of Fire Fighters. In the crowd some attendee’s donned shirts emblazoned with “#UnionsForAll” and “IAFF Fire Fighters for Biden.” This after, the IAFF formally endorsed Biden Monday.During his remarks, Biden made his support of unions clear.”I’m a union guy,” said Biden. “You folks built the middle class.”Biden, not unlike his Monday speech in Pittsburgh, spoke about restoring the dignity of work and to offer middle class families economic security. He called out employers who force employees to sign non-competes, the Trump administration’s tax cuts for the wealthy and companies who ship jobs overseas. He called for a $15 minimum wage. Biden also tried to position himself as the antithesis of President Donald Trump. He continued to harp on Trump’s response to Unite the Right rally in Charlottesville, Virginia and again spoke about this campaign as a “battle for the soul of this nation.””Give eight years to this administration in the White House,” said Biden. “We’re going to forever and fundamentally change the character of the country.” On health care, Biden said “we have to finish the job.” The former vice president said that the Affordable Care Act should be preserved and built upon, calling for a public-option.”We have to keep them from eviscerating the Affordable Care Act, but we’ve got to make sure that whether you’re covered by your employer or not at all. You should have a choice to buy into a public option.” On Tuesday, Biden also laid the groundwork for policies that he said his campaign would soon flesh out on education.”They said we need a more educated workforce. Come on man, more educated workforce? We know how to do that. And give people an opportunity to get the education they need, and I’m talking about post high school. I’m talking about trade school. I’m talking about short-term programs. I’m talking about people being able to work with their hands.” The Cedar Rapids event was the start of a two-day, four-stop swing through Iowa. He’s slated to deliver remarks to voters in Dubuque, Iowa Tuesday night. He heads to Iowa City and Des Moines on Wednesday.Biden has been busy since announcing his candidacy last Thursday. On Friday, he appeared on ABC’s “The View” where he that he is “more cognizant” of people’s private space after being accused of inappropriate behavior.On Monday, he and his wife, Dr. Jill Biden, sat down with ABC’s “Good Morning America” co-anchor Robin Roberts. Biden, in the interview which aired Tuesday morning on GMA, said he took “responsibility” for Anita Hill’s treatment when she testified before the Senate Judiciary committee during Supreme Court Justice Clarence Thomas’s confirmation hearing.”I believed her from the very beginning, but I was chairman. She did not get a fair hearing. She did not get treated well. That’s my responsibility,” Biden told Roberts during the interview on Monday. “As the committee chairman, I take responsibility that she did not get treated well. I take responsibility for that.” Biden apologized again to Hill “because, look, here’s the deal. She just did not get treated fair across the board. The system did not work.”