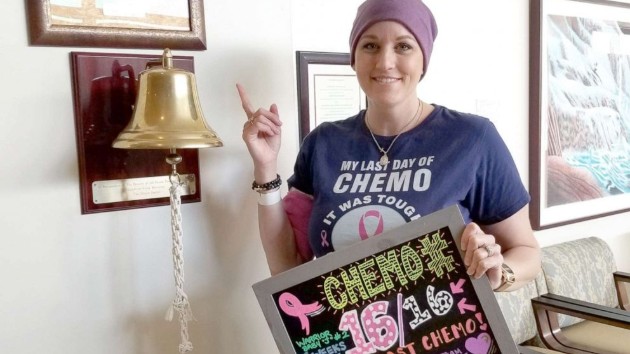 (TAMPA, Fla.) — Jessica Purcell completed 12 rounds of chemotherapy while pregnant with her second child.It was no surprise then that Purcell, of St. Petersburg, Florida, used all of her strength, and shed some tears, as she rang the bell last week at Moffitt Cancer Center in Tampa to mark her final chemotherapy treatment.”I remember that day seemed like it was going to be an eternity away when I started chemotherapy,” Purcell, 36, told ABC News’ Good Morning America. “To have it all done was just a weight lifted off of my shoulders.”Purcell, a U.S. Army reservist who works as a civilian for the U.S. Air Force in Tampa, first noticed a lymph node in her armpit in 2017, when she was pregnant with her oldest child, a daughter named Josephine. She said she and her doctor brushed it off as something pregnancy or hormone-related.Purcell didn’t think of it again until she noticed a lump, now in her breast, while weaning Josphine off breastfeeding in April of last year. A first mammogram was scheduled and then canceled because Purcell found out she was pregnant.After a miscarriage, Purcell scheduled a mammogram again but found out the day before the mammogram that she was pregnant again.At an 8-week checkup with her doctor for that pregnancy, Purcell was told to have an ultrasound and then a biopsy. The result was a diagnosis of invasive ductal carcinoma, the most common type of breast cancer, according to the American Cancer Society, in which the cancer is able to spread to other parts of the body. It is the second-leading cause of cancer death in women.At the time of her diagnosis, Purcell was nine-weeks pregnant, and her daughter Josephine was just over one year old.”The doctor told me, ‘This is cancer,’ and I don’t even think I spoke. I just sat there in silence,” Purcell said. “The only way I know how to describe is time completely stood still.”Purcell underwent a radical mastectomy of her left breast and an axillary lymph node dissection, a surgery to remove lymph nodes from under her left arm.At 21 weeks pregnant, last November, she began chemotherapy.Breast cancer occurs about once in every 3,000 pregnancies, with an average age for diagnosis between 32 and 38, according to the National Institutes of Health’s National Cancer Center.”These are young women so they don’t normally undergo screenings or mammograms, so usually the cancer is a bit more advanced,” said Dr. Hung Khong, an oncologist who was part of Purcell’s care team at Moffitt. “In Jessica’s case, that’s just what happened.”Chemotherapy for pregnant women is recommended only after the first trimester of pregnancy (after the baby’s organs have developed) and not after 35 weeks pregnant, or within three weeks of delivery, according to the American Cancer Society.Newer research has shown certain chemotherapy drugs used during the second and third trimesters are safe, but researchers “still don’t know if these children will have any long-term effects,” according to the American Cancer Society.Purcell said throughout her cancer battle she was concerned less for her own life than for that of the baby she was carrying.”Mom guilt is so real on so many levels, even normally,” said Purcell, who found support in a Facebook group of moms diagnosed with cancer while pregnant. “I think I still struggle with a lot of mom guilt and probably will forever, but I didn’t have a choice.””I was told, ‘If you want to live to be a mom to the daughter you have and to be a mom to your new baby, you have to do this. You don’t have time,"” she recalled.On March 11, 38 weeks into her pregnancy, Purcell gave birth via a cesarean section to a healthy baby boy named Jameson.”All I could say was, ‘He’s perfect,"” said Purcell, who named her son after her grandfather, who died of cancer when Purcell was 10. “I was just literally so overwhelmed and shocked at the same time.”While Purcell gave birth to Jameson, she also had her left ovary and fallopian tubes removed after doctors saw a tumor on her ovary.The pathology on the tumor came back benign, positive news that was the start of Purcell’s road to recovery.”That was a game changer for me because I had not had good news in a long time,” she said. “That was a huge, uplifting moment for me.”Motivated by that news and by the birth of her son, Purcell put in another four weeks of chemotherapy before ringing the bell last week.”I personally did better on chemotherapy while I was pregnant,” she said. “The pain and nausea were horrendous but I think I was so focused on the baby the whole time that there was nothing that come close to that anxiety and stress.”The toll taken on her has been both physical and emotional, she says, including dealing with the fact that she cannot breastfeed Jameson due to the cancer and treatments. Purcell has relied on donor breast milk, for which she said she is very grateful.The next step for Purcell is to start six weeks of radiation at the end of May. Dr. Khong called Purcell’s outcome “very good.””My message I want to get out to every woman is if there is literally one woman out there in my situation, don’t give up hope,” Purcell said. “Don’t give up your faith because it’s totally doable. My little guy is a living miracle.”Purcell also said a lesson she has learned through the past year is the need to advocate for yourself, particularly if you’re a woman.”Do not ever feel bad for advocating yourself and questioning a doctor,” she said. “I feel like my diagnosis could have been a year and a half earlier if I had really gone to bat for myself.”Copyright © 2019, ABC Radio. All rights reserved.

Woman who made Bernie Sanders’ viral inauguration mittens says they’re not for sale
For GOP firebrand Rep. Lauren Boebert, anger and suspicion linger after Capitol riot
Olivia Jade returns to YouTube after over a year, “I can’t change the past”
1,900 doses of Moderna vaccine destroyed after cleaner unplugs freezer in Boston
Columbus to invest nearly $5M in police bodycams after Andre Hill shooting
Kristen Bell opens up about “struggling” with her mental health, therapy with husband Dax Shepard