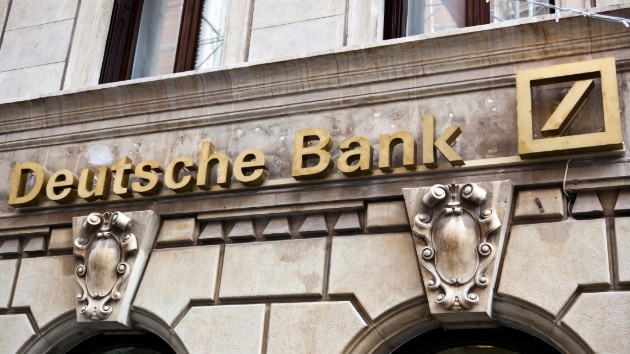 (NEW YORK) — President Donald Trump, along with his family and the Trump Organization, have filed a lawsuit in federal court in New York against Deutsche bank and Capitol One to prevent them from turning over documents about the Trumps and their business to Congress. Attorneys representing Trump and his family call the subpoenas issued “unlawful and illegitimate.” “We filed this case to protect the privacy rights of the President, his family and their businesses. The subpoenas issued to Deutsche Bank and Capital One by Chairpersons Schiff and Waters are unlawful and illegitimate. They seek information going back decades from anyone with even a tangential connection to the President, including children, minors and spouses. Every citizen should be concerned about this sweeping, lawless, invasion of privacy. We look forward to vindicating our clients’ rights in this matter,” according to a statement from Will Consavoy and Patrick Strawbridge, counsel for the president and individual plaintiffs, and Marc L. Mukasey, counsel for the Trump business entities.As one of the Trump Organization’s most reliable lenders in recent years, the German banking giant Deutsche has come under scrutiny from several investigative bodies examining the president’s personal finances.Earlier this month, the House Intelligence and Financial Services committees — chaired by Rep. Adam Schiff, D-Calif., and Rep. Maxine Waters, D-Calif., respectively — jointly subpoenaed Deutsche Bank as part of their ongoing investigation into President Trump’s financial dealings and concerns about foreign influence over the Trump Organization.In December 2017, special counsel Robert Mueller issued a subpoena to the German bank, though the nature of Mueller’s request was not clear.Just a week ago, Deutsche Bank began turning over financial records related to its business with Trump, in response to a subpoena from the New York Attorney General’s Office, a source familiar with the matter told ABC News.

Melissa Benoist is absolutely in love with being a mom
Election 2020 live updates: Trump slams debate changes
‘Dawson’s Creek’ is heading to Netflix — minus its iconic theme song
Election 2020 live updates: 14 days to go, showdown debate Thursday
Florida’s Latino voters being bombarded with right-wing misinformation, experts and advocates say
NASA to skim the surface of an asteroid and bring a sample home