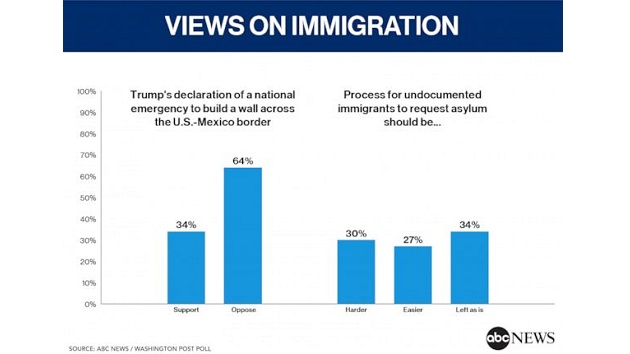 (NEW YORK) — Americans by nearly 2 to 1 oppose Donald Trump’s attempts to build a wall across the U.S.-Mexico border and just three in 10 in the latest ABC News/Washington Post poll support making it harder for undocumented immigrants to request asylum protection in the United States.Sixty-four percent oppose Trump declaring a national emergency in order to build a wall without congressional approval, while 34 percent back him. That includes 55 percent who “strongly” disapprove, vs. 28 percent who strongly support. See a PDF with the full results, charts and tables from the poll.Just 30 percent, moreover, favor making it harder for undocumented immigrants to seek asylum, as Trump has proposed. Essentially as many, 27 percent, would make it easier, while 34 percent favor leaving the law as it is now.Majority opposition to Trump’s policies stands even as a sense of the seriousness of the situation has risen. Thirty-five percent now see a crisis, up from 24 percent in January. That said, 64 percent still don’t ascribe to the president’s claim of a border crisis.Overall, 57 percent in the poll, produced for ABC by Langer Research Associates, disapprove of how Trump is handling immigration, with 39 percent approving. (This matches Trump’s overall job approval rating.) Disapproval has eased a bit, from 62 percent when last tested in September 2017.In a comparatively better result for Trump, the public divides about evenly on who’s mainly to blame for the border situation. Thirty-five percent chiefly blame the Democrats in Congress and 32 percent chiefly blame Trump, with an additional 27 percent blaming neither or both. Copyright © 2019, ABC Radio. All rights reserved.