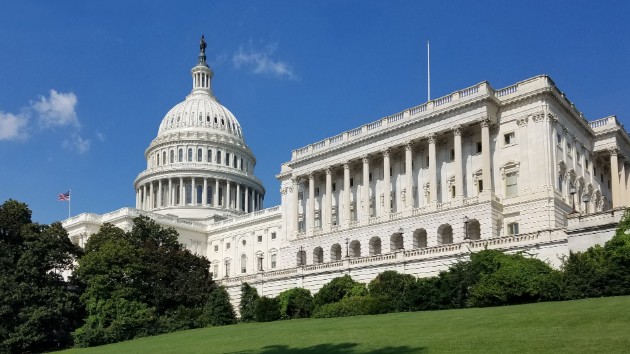 (WASHINGTON) — Democrats were poised to meet with President Donald Trump Tuesday morning to kick off discussions on a massive infrastructure package, hoping to salvage a bipartisan moment before the 2020 presidential campaign and partisanship of a divided government overtake the moment. Ahead of the meeting, Democrats appeared split on how Congress will pay for a package that could reach up to $2 trillion, especially with calls to increase the gasoline tax. House Speaker Nancy Pelosi phoned Trump on April 4 to request the meeting. She’ll be joined by Senate Minority Leader Chuck Schumer and top policy stakeholders at the White House.Pelosi and Schumer wrote a letter to Trump on Monday outlining Democratic priorities, “which we wanted you to be aware of before the meeting,” including “substantial, new and real revenue,” clean energy and resiliency priorities, and “strong Buy America, labor, and women, veteran and minority-owned business protections.””We look forward to hearing your ideas on how to pay for this package to ensure that it is big and bold enough to meet our country’s needs,” Pelosi and Schumer wrote. “This bill can and should be a major jobs and ownership boost for the American people — manufacturers, labor contractors, and women, veteran and minority-owned businesses.”But heading into the meeting, Democrats have not coalesced around a dollar amount for a package, and they weren’t expected to present the president with a list of offsets to potential infrastructure spending.A source close to Schumer warned that unless Trump considers “undoing” elements of the Tax Cuts and Jobs Act, “Schumer won’t even consider a proposal from the president to raise the gas tax, of which the poor and working people would bear the brunt.”But several Democratic aides said Schumer’s red line is not representative of all Democrats heading into the meeting, given that the tax law of 2017 is arguably Trump’s greatest legislative achievement.”It’s not a likely outcome,” one senior Democratic aide predicted ahead of the meeting. “People see what he’s trying to do there, but I think there are others who think it complicates what’s already a complicated situation.”House Transportation and Infrastructure Chairman Peter DeFazio, a vocal proponent of raising the gasoline tax, which hasn’t been increased since 1993, said doing so could raise billions of dollars, though he has deferred to the Ways and Means committee for the specifics on pulling the legislative branch’s purse strings.DeFazio testified before the committee in March and argued Congress could raise $500 billion for infrastructure investment “by indexing the gas and diesel tax, with the increases capped at 1.5 cents per year.””By letting existing user fees — the gasoline and diesel tax — sit unadjusted for over 25 years, Congress has undermined this longstanding notion and shaken the stability of highway and transit funding in recent years. Since 1993, federal gas and diesel taxes have lost over 40% of their purchasing power,” DeFazio testified on March 6. “We can provide an immediate boost in investment by issuing bonds tied to the future indexation revenues. The bond revenues are available immediately and fully offset.”DeFazio is one of the Democratic leaders invited to join Pelosi and Schumer at the meeting Tuesday.”I am in discussions with my leadership in advance of this meeting and I am hopeful that the talks will be productive, and a catalyst for the robust infrastructure investment we desperately need and to which I’m deeply committed to enacting,” DeFazio, D-Ore., said in a statement to ABC News.White House press secretary Sarah Sanders called the Democratic outreach “a good first step,” but agreed that the discussions are simply a starting point in bipartisan negotiations.”It’s vital for our country to repair our bridges, our roads, our airports, as well as our technology infrastructure and hopefully we’ll see some positive things come out of that meeting tomorrow, I know it’s something the president is passionate about as a builder himself,” Sanders told reporters at the White House Monday. “Both sides know something has to be done. A conversation needs to be started, and we’ll see what happens tomorrow.”Pelosi and Schumer last met with Trump at the White House on Jan. 9, amid the 35-day government shutdown, shortly after the start of the new session of Congress and just a few weeks after congressional leaders engaged in a public airing of their grievances on Dec. 11 in front of the White House press corps in the Oval Office.The follow-up, closed-door January meeting ended with Trump walking out of the Situation Room less than 15 minutes into the meeting, declaring it “a total waste of time” after Democrats refused to budge on the president’s demands for a border wall.Axios reported Monday that the president has told Democrats he would like to spend up to $2 trillion on the package, though Democratic aides downplayed the figure.”Trump says numbers that don’t mean anything,” a Democratic aide said. “People didn’t take that as a real proposal. He says a random number out loud, with no meaning.””What’s important is looking at where all the needs are, seeing what that costs are, seeing what can be paid for — not ‘let’s start at number and build up or down to it,"” the aide added.Congressional Republicans and Democrats agree Tuesday’s talks are a starting point and won’t produce an agreement until GOP lawmakers are a party to the talks.”I don’t think a deal is going to be cut at this meeting,” a Democratic aide said. “This is very much a first meeting, a starting point. Nobody should feel cut out.”Sanders said she “wouldn’t be surprised” if Tuesday’s discussion splits off into immigration reform.”We really do have a crisis at the border. It is inhumane to ignore it longer,” she said. “Now members of the Democrat Party hopefully are seeing exactly what the president has been talking about and will have a new willingness to help us address it that they haven’t had in the past. We’d like to see that happen.”Copyright © 2019, ABC Radio. All rights reserved.

Jennifer Lawrence admits she “was a little Republican” until Trump became president
Dentists warn against these vampire fangs Halloween hacks on TikTok
Lisa Marie Presley pens heartbreaking tribute to late son on his 28th birthday
How will Biden deal with Trump’s personal attacks at Thursday’s debate?
Trump’s Operation Warp Speed adviser: All Americans could be immunized with COVID vaccine by June
Election 2020 updates: ‘I think the mute is very unfair’: Trump on debate mics