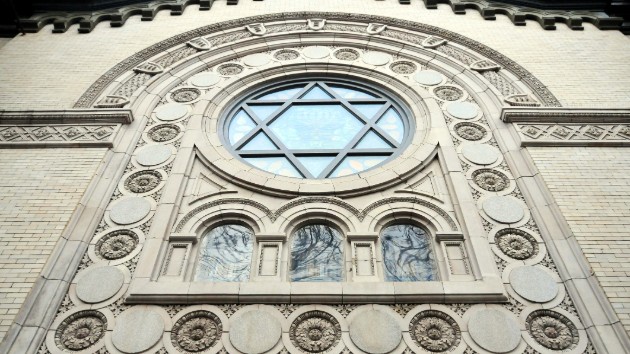 (NEW YORK) — The Jewish community in the United States experienced near-historic levels of anti-Semitism last year, with attacks against Jews and Jewish institutions doubling in number, according to new data from the Anti-Defamation League. The ADL recorded a total of 1,879 anti-Semitic incidents across the country in 2018, the third-highest year on record since the New York-based Jewish organization began tracking such data in the 1970s. Those incidents included cases of assaults, harassment and vandalism.The total number of anti-Semitic incidents recorded last year dipped 5 percent versus 2017. But the number of incidents in 2018 was actually a 99 percent increase versus 2015, according to the ADL. “We’ve worked hard to push back against anti-Semitism, and succeeded in improving hate crime laws, and yet we continue to experience an alarmingly high number of anti-Semitic acts,” ADL’s CEO and national director, Jonathan Greenblatt, said in a statement Tuesday.Last year marked the single deadliest attack on the Jewish community in U.S. history. A gunman shot and killed 11 worshipers at the Tree of Life synagogue in Pittsburgh on Oct. 27. Minutes before carrying out the carnage, the suspect is believed to have posted his intent to commit the massacre on Gab, a social media platform that’s popular among white supremacists and the alt-right, investigators said. The attack was one of 39 reported physical assaults on Jews in 2018, a 105 percent increase over the previous year, according to the ADL.“We unfortunately saw this trend continue into 2019 with the tragic shooting at the Chabad synagogue in Poway,” Greenblatt said. “It’s clear we must remain vigilant in working to counter the threat of violent anti-Semitism and denounce it in all forms, wherever the source and regardless of the political affiliation of its proponents.”Anti-Semitic incidents were recorded in all but four U.S. states last year. The states with the highest number tend to be those with the biggest Jewish populations, such as California, New York, New Jersey and Massachusetts, according to the ADL. Thirteen percent of the total number of anti-Semitic incidents recorded in 2018 were attributable to known extremist groups or individuals inspired by extremist ideology — the highest level of anti-Semitic incidents with known connections to extremist individuals or groups since 2004, according to the ADL. “The increased number of anti-Semitic incidents tied to extremist groups is deeply troubling and should be addressed immediately by police and prosecutors,” Jack McDevitt, director of the Institute on Race and Justice at Northeastern University, said in a statement Tuesday.Along with the release of the new data, the ADL made policy recommendations for leaders in government, civil society and tech. The group, for instance, called on Congress to hold additional hearings on the uptick in hate crimes, the rise of extremist groups and proliferation of their propaganda. Moreover, the ADL is urging lawmakers to support legislation that improves coordinated responses and collects data on domestic terrorism. “It is incumbent upon our leaders to continue fighting anti-Semitism at every opportunity,” George Selim, a former U.S. Department of Homeland Security official who is now ADL’s senior vice president of programs, said in a statement Tuesday. “We will continue to advocate for legislative and other remedies to ensure that there is no place for anti-Semitism in our society.” Copyright © 2019, ABC Radio. All rights reserved.

Nearly a dozen ex-military members among those arrested in connection with Capitol riot
“Oh, it’s fantastic!” Diane Lane loves the fans prompting the release of the ‘Justice League’ “Snyder Cut”
Horn helmet-wearing, painted face Capitol rioter should remain in custody: DOJ
Two US COVID variants have been identified. What does that mean for vaccines?
‘Cobra Kai’ star Martin Kove had to be “persuaded” to join the ‘Karate Kid’ reboot
Self-described ‘QAnon shaman’ should remain in custody: DOJ