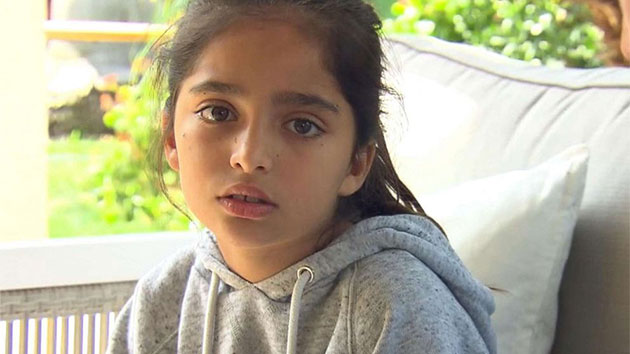 (SAN DIEGO) — At the age of 8, Noya Dahan has already fled rocket attacks in the Gaza Strip, witnessed her home in California vandalized with anti-Semitic graffiti and, now, she’s survived a shooting at her synagogue that left one beloved member dead and she, her rabbi and her uncle with bullet wounds.

The youngest victim of Saturday’s shooting at the Chabad of Poway synagogue near San Diego, Noya told ABC News that the safety of the one place she used to feel secure in, a synagogue, has been shattered.

“I never thought that was going to happen to me because like it’s a safe place, you’re supposed to feel safe,” she said.

A day after an alleged 19-year-old gunman, identified by police as John Earnest, opened fire inside the synagogue, turning a Passover service into what Noya’s father described as “like a war,” survivors spoke out, offering details on the bullets, blood and chaos they witnessed in the latest gun rampage in America.

Noya was hit in the face, near her right cheek and in her right leg by bullet fragments during the attack. She said she will never forget how loud the gunshots were or seeing her rabbi, Yisroel Goldstein, bleeding profusely from both hands after being shot by the gunman.

“I saw the rabbi jumping like crazy, and I couldn’t even imagine…,” Noya said. “I felt like I was in a movie or in a dream or something.”

Rabbi Goldstein, who founded the synagogue 33 years ago with his wife, said he was just getting prepared to deliver his Passover sermon at about 11:30 a.m. when he went out into the lobby and ran into one of the temple’s members, Lori Kaye, 60.

“She’s been a member with us since the ’90s. She’s one of the most kindest persons, an activist, who’s always there to help others, to help the world. That was her mission in life, just to be out, to do kindness and goodness,” Goldstein told ABC News on Sunday.

He said Kaye was at the service with her husband, Dr. Howard Kaye, and their 22-year-old daughter, Hannah.

“She asked me what time Yizkor was,” he said of a special pray for the departed. “Her mother just recently died and she came to memorialize her.”

He said he went to his office to freshen up, and when he came back Kaye had confirmed on her own the time for the Yizkor prayer service.

“We both looked and smiled at each other,” the rabbi said. “I turned around to walk into the banquet hall, where I was going to wash my hands, and I heard the first loud noise.”

At first he didn’t know if Kaye had fallen or if a table had toppled over.

“I turned around and I see the shooter standing there in position with a rifle moving it towards me,” Goldstein said.

He said he put both his hands in front of his face in an effort to protect himself. A bullet severed the index finger of his right hand, and another nearly did the same to his left index finger, he said.

He saw Kaye, mortally wounded, lying on the floor. Bullets continued to fly by on either side of him, he said.

“I was centimeters from death,” Goldstein said. “I turn my back towards him and he’s shooting bullets towards me, trying to get me down in the banquet hall.”

He said he saw a group of children in the banquet hall, including his grandchildren and Noya and he immediately began to gather them up to get them out of harm’s way.

Noya’s uncle, Almog Peretz, 34, who lives in Israel but is in California on vacation, told ABC News that he was walking from the banquet hall when he heard the shots and saw the gunman.

“I turn around and I saw him and the gun, the big gun. He looks at me and he shoots one after one,” he said.

He said he picked up a 5-year-old girl walking next to him, lifted another child in his arms and began to direct up to 20 children out a side door, directing them to the rabbi’s house next door.

He said he didn’t realize he had been shot in the back of the right leg until a relative noticed that the back of his pant leg was full of blood.

His brother-in-law, Noya’s father, Israel Dahan, said he was frantically searching for his three children. He said he initially feared one of his girls who had been in the restroom was dead and sent his brother-in-law in to find her.

Israel Dahan, who moved his family to California to get away from the danger of rocket attacks on their former home in the Gaza Strip, said his daughter was frantic, but alive.

Rabbi Goldstein, who received a phone call from President Donald Trump while speaking with ABC News, said a U.S. Border Patrol agent named Jonathan, who had become a member of his congregation and another member named Oscar Stewart, a former military soldier, confronted the gunman.

“One of the miracles that happened here was that the rifle got jammed,” he said of the gunman’s weapon.

He said Oscar and Jonathan chased the gunman out of the synagogue. He said Jonathan, the Border Patrol agent, picked up a gun apparently dropped by another member of the congregation, and fired at the suspect, hitting his car as he drove off.

A police K-9 officer saw the gunman nearby, officials said. The suspect jumped out of his car, put his hands up and was arrested, San Diego Police Chief David Nisleit said during the conference on Saturday.

Rabbi Goldstein said that once the shooter fled the synagogue he went back inside and saw Lori Kaye lying unconscious on the floor. He said her husband entered the lobby and fainted.

“I saw the sight of fear, of anger and despair on my fellow Jews…, I got up on the chair and I said, ‘Guys, Am Yisrael Chai,"” he said reciting the Hebrew phrase for ‘the people of Israel live.’

“‘We are alive,"” he said he told the worshipers. “‘We need to stand tall. We need to be proud of our heritage and do not allow any of this terrorism to tear us down.”

Since the shooting, he has asked himself why he survived.

“What do I do with this? What do I do with my survival? I think there is a message that I need to share with everyone,” he said. “And we’ve got to get the message out there: People need to be aware that anti-Semitism is a reality. It’s happening now just like it was happening prior to the holocaust. This is how the holocaust started and we have to get up and stop it.”

For young Noya, whose home was vandalized with anti-Semitic graffiti four years ago, life has changed forever.

“I just kept on dreaming about it. I just couldn’t … dream about something good. I just dreamt about the bad things,” she told ABC News. “I really don’t feel safe because this is not the first and definitely not the last time this is going to happen. So now I know just to watch out and stuff for dangerous things to happen.”

Trump plans to leave in dramatic fashion yet continues to stay out of sight
Survey says 60% consider themselves “total film buffs” thanks to pandemic binge-watching
Coronavirus live updates: California calls for pausing use of Moderna vaccine lot
Damaging winds expected in California, heavy snow for the Rockies and Eastern Great Lakes
‘WandaVision’ star Paul Bettany on his father’s struggle to come out of the closet
In scathing draft of letter never made public, Trump chided James Comey for ‘erratic,’ ‘self-indulgent’ conduct