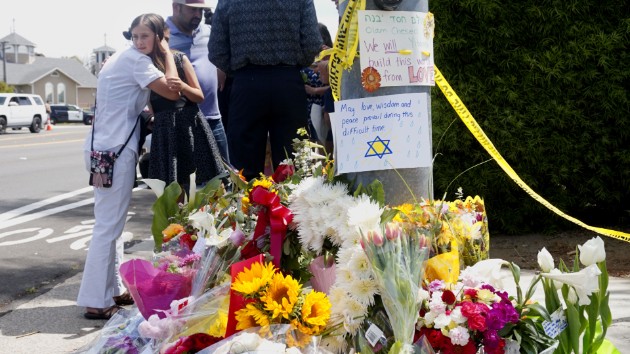 (SAN DIEGO) — Grieving family and friends will gather Monday at the funeral for Lori Gilbert-Kaye, a 60-year-old woman shot dead Saturday at the Chabad of Poway synagogue in San Diego County.Meanwhile, the family of the 19-year-old suspected gunman is speaking out, saying, “to our great shame, he is now part of the history of evil that has been perpetrated on Jewish people for centuries.”Gilbert-Kaye was at the synagogue with her husband and daughter for a memorial service in honor of her mother, who recently died, Rabbi Yisroel Goldstein told reporters.When the shooting broke out, Gilbert-Kaye was in the lobby, while her friend, Rochelle Schwartz, was in the sanctuary with Gilbert-Kaye’s daughter.”I just remember getting her down and covering her with my body and telling her, ‘Please be quiet. I don’t want the shooter to know that we’re here,"” Schwartz told ABC News. “She was just so brave.”Once the gunfire ended, Schwartz and Gilbert-Kaye’s husband and daughter rushed to the lobby.”It was horrific,” Schwartz said.Three others were injured in the attack in the synagogue’s lobby during Saturday morning services, on the last day of Passover.”Lori is really a pillar of the community. She has the most generous, kind heart,” Schwartz said, overcome with emotion. “We’re gonna miss her. She’s a very special person. And I just pray that this never happens again. We have to work on education and we have to stop this insanity. It’s just so tragic.””We’re gonna go back to services,” Schwartz added. “We’re gonna show that were strong enough to just continue and not let this get to us.”As the shocked community comes together in grief, the suspected gunman, 19-year-old John Earnest, is in custody and being held on arresting charges of one count of murder and three counts of attempted murder. Investigators believe Earnest acted alone, and authorities say he bought the AR-style weapon used in the attack on Friday.Earnest’s family said in a statement, “How our son was attracted to such darkness is a terrifying mystery to us, though we are confident that law enforcement will uncover many details of the path that he took to this evil and despicable act.””He has killed and injured the faithful who were gathered in a sacred place on a sacred day,” the family said. “Our son’s actions were informed by people we do not know, and ideas we do not hold. Like our other five children, he was raised in a family, a faith, and a community that all rejected hate and taught that love must be the motive for everything we do.””Our heavy hearts will forever go out to the victims and survivors,” the family said, “And we pray for peace.”The Florida Senate on Monday passed an anti-Semitism bill, prohibiting religious discrimination in Florida’s public education system. The law would call for school administrators to combat anti-Semitism in the same way they address religious discrimination, according to The Miami Herald.Copyright © 2019, ABC Radio. All rights reserved.