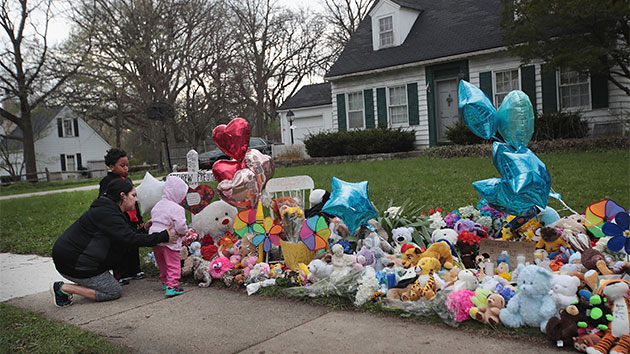 (CRYSTAL LAKE, Ill. ) — A funeral home will be hosting a public memorial service for a 5-year-old Illinois boy who was found beaten to death and wrapped in plastic inside a shallow grave after allegedly being killed by his parents.

Andrew “AJ” Freund, who went missing on April 18, was found by the Crystal Lake Police Department after a week-long manhunt in a rural area near Woodstock, Illinois. The Davenport Family Funeral Home and Crematory in Crystal Lake announced on its website Friday that a public visitation would be held for AJ on May 3 from 1 p.m. to 8 p.m.

The little boy’s parents, Andrew “Drew” Freund Sr. and Joann Cunningham, were charged with multiple counts of murder, among other charges. They are expected to be arraigned in court on Monday.

AJ died sometime around April 15 from head trauma due to multiple blunt force injuries, according to the coroner’s report.

The Department of Children and Family Services had been aware of his parents’ alleged abuse since he was born in 2013 with opiates in his system, a DCFS spokesman said.

“AJ, now an angel to all of us, will be forever remembered in the hearts of everyone he touched — friends, family and people near and far throughout our community,” the obituary said.

McHenry County residents put together a GoFundMe page to raise money for the rest of AJ’s family. Since the fundraiser launched on Wednesday, the page has exceeded its $2,500 goal, raising over $40,000 as of Saturday afternoon.

Biden to unveil COVID-focused ad during World Series featuring Arizona salon owner: ‘I’m afraid of dying’
Man apologizes as he’s sentenced to life in prison for Mackenzie Lueck slaying
Wunmi Mosaku would “run for the hills” if she were actually in her Netflix horror movie ‘His House’
Rochester police offering $10,000 reward for information on deadly mass shooting
Jennifer Dulos’ family wants her declared dead to bring ‘closure,’ attorney says
“He did what he did”: Sacha Baron Cohen responds to ‘Borat 2’ scene with Rudy Giuliani