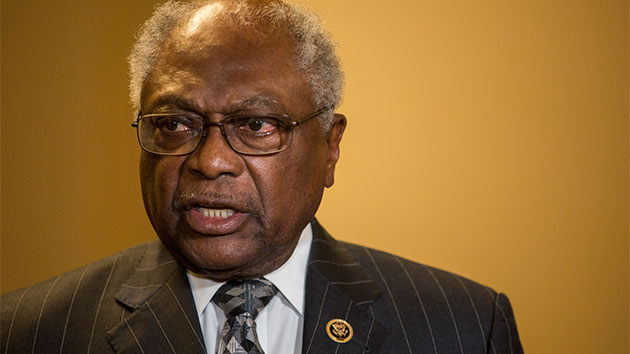 (WASHINGTON) —  One of the most influential Democrats in South Carolina said Sunday that former Vice President Joe Biden is “probably the leader” in the key early primary state, but cautioned that it’s still early in the 2020 presidential campaign.

“I have talked to people here in South Carolina and I believe that at this point in time, Joe Biden is probably the leader. The question is whether or not he can maintain his lead,” Rep. James Clyburn, the House majority whip, said on “This Week.” “But the campaign is early, and there have been some tremendous rollouts here in this state.”

Back in January, Clyburn said that if Biden entered the Democratic field, “everybody else would be running for second place.”

In a new ABC News/Washington Post poll released Sunday, Biden, who only officially announced his campaign Thursday, comes out on top, ahead of Sen. Bernie Sanders and Pete Buttigieg.

Clyburn told ABC News Chief Anchor George Stephanopoulos that Biden was “absolutely” right to invoke the deadly 2017 clash between white nationalists and counterprotesters in Charlottesville, Virginia in his announcement video on Thursday. In the video, Biden repeats Trump’s heavily-criticized response to that day, in which he said there were “very fine people on both sides.”

At the White House on Friday, the president told a group of reporters that he answered the question “perfectly,” and claimed that he was referring to “people that went because they felt very strongly about the monument to Robert E. Lee, a great general,” referring to the commander of Confederate forces during the American Civil War.

Clyburn responded that he believes Trump is “expressing what is in his heart.”

“Robert E. Lee was a slave owner and a brutal slave master,” Clyburn said. Thankfully he lost that war and I find it kind of interesting that the president is now glorifying a loser. He always said he hated losers. Robert E. Lee was a loser.”

That rally, which attracted white supremacist and neo Nazi groups, turned deadly when a man plowed his car into a crowd of counterprotesters, killing 32-year-old Heather Heyer.

“I think that’s what the crux of this campaign is going to be about,” Clyburn said. “It’s going to be about who can bring this country together. And for anybody who is running for the presidential nomination on the Democratic side, I think you’ve got to focus on bringing this country together on the domestic front, and you’ve got to think about our international relationships around the world.”

Stephanopoulos asked Clyburn about the president’s comments last week, in which he continued to defend his 2017 response to the “Unite the Right” rally in Charlottesville.

The South Carolina congressman, who represents areas in and around Columbia and Charleston, also addressed the shooting at the Chabad of Poway synagogue in California on Saturday. He recalled the attack in his district on the Emanuel AME Church in Charleston in 2015, and said the rhetoric in the country needs to “cool.”

“Those nine souls at Emanuel AME Church in Charleston are on my mind daily,” Clyburn said. “I think about them. I spoke at one of those funerals. And so I am very concerned that we do not start some discussions and take some actions that will de-glorify guns and that we cool our hate speech.”

He added that “we need some leadership on this from our political leaders from the White House on down.”

President Trump responded to early reports of the shooting in California on Saturday evening at the White House, saying it “looked like a hate crime.”