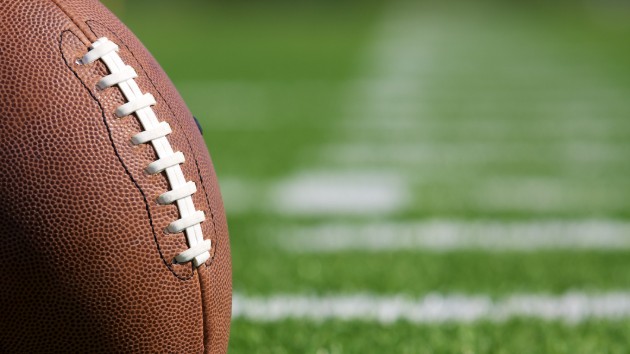 (NEW YORK) — The hunt to identify a gunman who wounded New York Giants’ draft pick Corey Ballentine and killed his friend and college teammate at a Kansas house party intensified Monday with police asking for the public’s help in catching the killer.The shooting in Topeka occurred early Sunday morning, just hours after 23-year-old Ballentine, a senior at Washburn University, realized his dream of making it to the NFL. Ballentine’s college teammate Dwane Simmons, also 23, was killed in the shooting, police said.”He’s doing as good as can be expected for someone who was shot and lost his best friend,” Ballentine’s father, Karl Vaughn, told ABC News when reached by phone Monday morning. “We’ll get through this with prayer.”On Saturday, Ballentine, a standout defensive back at the NCAA Division II school, was selected as the Giants’ sixth-round draft pick.”It’s all a crazy dream until you do it. I can’t even explain the emotions I have right now,” Ballentine tweeted after he was selected in the NFL draft. Giants’ head coach Pat Shurmur called Ballentine shortly after he was drafted to congratulate him and welcome him to the team.”Are you healthy [and] ready to play?” Shurmur asked Ballentine in a video of the phone call.Ballentine responded, “Yes, sir, I’m ready to get started. I’ve been waiting on this opportunity for a lifetime.”Topeka police said that at 12:45 a.m. local time Sunday, gunshots erupted outside a house party Ballentine and Simmons attended several blocks from the Washburn campus.Police officers responding to the scene found Simmons mortally wounded in the street, Gretchen Koenen, a spokeswoman for the Topeka Police Department, told ABC News on Monday.Ballentine, who suffered a non-life-threatening gunshot wound, was driven by private car to an area hospital. Neither Vaughn nor the police would say where Ballentine was hit on his body during the shooting.Koenen said Monday that no arrests have been made. Police are asking the public to come forward to help identify the gunman.”There were several dozen people at this social gathering where this occurred,” Koenen said.Simmons’ father, Navarro Simmons, told reporters on Sunday that his son and Ballentine were getting ready to leave the house party when a vehicle pulled up and gunfire broke out.”This was a senseless murder,” Navarro Simmons said. “This shattered a lot of people.”In a statement released Sunday, the Giants said, “We are aware of the tragic situation and continue to gather information. We have spoken to Corey, and he is recovering in the hospital. Our thoughts are with Dwane Simmons’ family, friends and teammates and the rest of the Washburn community.”Ballentine’s father said Monday morning that his son has been released from the hospital.”Any time we lose a student, it’s a sad occasion, but this is particularly poignant to lose a student through such a senseless act,” Jerry Farley, president of Washburn University, said in a statement. “Both Dwane and Corey have been great examples and representatives of the football team and of Washburn University in general.”