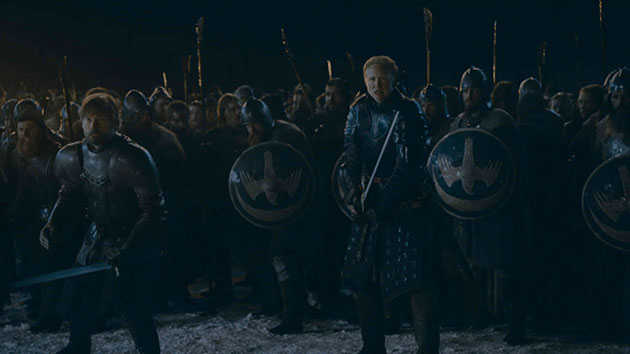 (NEW YORK) — (SPOILERS AHEAD!)  After two episodes of table-setting, character-bonding and truth-telling, everything came to a head on Sunday night’s episode of Game of Thrones, titled “The Long Night.”

We left off last week with Jon Snow picking the absolute worst time to tell Daenerys Targaryen that he’s the son of her brother, Rhaegar Targaryen, and Lyanna Stark, making him true heir to the Iron Throne and — oh yeah — Dany’s nephew.

Seconds later, the battle horns rang, announcing the arrival of the Army of the Dead. But now that the battle is here, the main question on everyone’s mind is: ‘Who’s going to die?’

In the end, the answer was The Night King, and it was Arya Stark who killed him.

Here’s how it all went down.

As everyone readies for battle, out of the darkness comes the Red Woman, the priestess Melisandre, who’s returned to help those still living. She grabs the swords of the Dothraki soldiers and recites an incantation, lighting them all on fire. She then enters the Winterfell gates, and she and Arya exchange a knowing look.

All fired up — literally — the Dothraki ride out into the dark first with Ser Jorah and Jon’s direwolf, Ghost.  Watching from Winterfell, the rest of our heroes see the now distant fires blink out. Some of the terrified horses gallop back, with Ser Jorah the only fighter who returns. Dany, who’s already seen enough, mounts the dragon Drogon, and Jon mounts Rhaegal.

On the ground, the massive Army of the Dead charges with full force into the Unsullied, and the battle truly begins. Dany and Jon supply air support with dragon fire. But the battlefield is soon engulfed by an icy wind, making it hard to see. As the battle continues, we get our first named casualty: Night’s Watch member Eddison Tollett, aka Dolorous Edd.

Sansa and Arya look on, and Arya hands her sister a dagger and tells her to head to the crypt. “Stick ’em with the pointy end,” Arya helpfully advises Sansa — a callback to what Jon Snow told Arya way back in season one, when Arya received her sword, Needle.  Sansa arrives in the crypt, silently conveying to everyone that the battle isn’t going all that well.

As Jon and Dany attempt to fly through less than clear conditions, the Winterfell army retreats in the face of the tsunami of wights. They try to signal to Dany to ignite a defensive trench with dragonfire, but she can’t see the signal through the icy gale that envelops her.  Arya and the rest of the archers try to light the trench with fire arrows, but it’s not getting the job done.

Then, the Unsullied lead Melisandre out to the battlefield, and she lights the trench with her magic… at the very last second.  Now the Army of the Dead stands motionless in front of the flaming defenses. Winterfell is safe — for now.

In the crypt, Tyrion and Sansa bond over their shared history, with Sansa telling Tyrion thhat he was the best husband she’s had, which he thinks says more about the two other husbands Sansa’s had — the monstrous Joffrey Lannister and the sadistic Ramsay Bolton — than it does about him. However, Sansa says it wouldn’t have worked out between them anyway, since Tyrion has bent the knee to the Dragon Queen and she hasn’t. That prompts Dany’s adviser, Missandei, listening nearby, to accurately point out that they’d already be dead were it not for Daenerys.

Meanwhile, Theon and a small contingent of archers is protecting Bran in the godswood.  Theon begins to apologize to Bran for his whole sacking-of-Winterfell betrayal several seasons back. But Bran lets Theon off the hook, declaring that his actions have brought him back home, right where he needs to be.  Bran then wargs into a raven and flies over the battlefield, until he finds the Night King riding his zombie dragon, Viserion.

The Night King extends his hand and wights on the ground, previously halted by the fiery trench, now throw themselves atop the flames, creating bridges of undead bodies across which the other wights stream, untouched by the flames.

The Army of the Dead climbs the outer wall and eventually breaches Winterfell. Arya joins the fight, proving she’s just as adept at killing ice zombies as she’s at crossing names off her list. Meanwhile, The Hound is having a rare crisis of confidence, which Beric Dondarrion, wielding his flaming sword, tries to shake by telling him to look to Arya for inspiration.

As if we didn’t have enough to deal with, an undead ice giant enters the fray, swinging a club and gravely injuring Lyanna Mormont, who until then has been commanding part of Winterfell’s defenses like a boss.  Mortally wounded, she rises and charges the giant, who crushes her in its hand as it lifts Lyanna to his face. Just as it seems the giant’s about to eat her, Lyanna screams and plunges a dragonglass dagger into the giant’s eye, and they both fall to the ground, dead.

Meanwhile, a bloodied and exhausted Arya seeks shelter and rest in Winterfell’s dark library, which is soon infested with White Walkers.  Arya dodges them, but then a flood of dead pour out of the hallways and chase her. She’s rescued by The Hound and Beric, who loses his flaming sword in the melee.  Brought back to life many times thanks to the Lord of Light, Beric is stabbed defending Arya and The Hound, and stumbles with them to momentary safety behind a barricaded door before dying for the last time.

Inside the room, Arya receives an unexpected pep talk from Melisandre, who Arya remembers once told her that she’d “shut many eyes” in the future.  “Brown, green and blue,” Melisandre adds.  We all know who has blue eyes, don’t we?

“What do we say to the god of death?” Melisandre asks.  It’s another callback to the season-one words of Arya’s sword instructor, the “dancing master,” Syrio Forel.  “Not today,” Arya replies.  And with renewed purpose in her eyes, she suddenly dashes off, her destination unknown.

Back in the godswood, Theon and his men fend off the attacking wights, while in the air, Jon and Dany are on the tail of the Night King. We get some cool in-air dragon fighting as the Night King readies an ice spear, which is what he used to kill Viserion, which he now rides. Dany, riding Drogon, is able to knock the Night King off Viserion, while Jon crash lands with Rhaegal. The Mother of Dragons spots the Night King on the ground, orders ‘Dracarys” and rains fire upon him. It can’t be that easy, can it?

Of course not! The fire subsides, and the Night King is still standing — smiling, even. He picks up an ice spear and throws it at Dany, who banks Drogon just in time to avoid the missile.  On the ground, Jon — now on foot — draws his sword and pursues the Night King.  But his quarry stops, turns to face him — and then raises all of the newly dead soldiers as wights, both outside and inside Winterfell…including Lyanna Mormont and Dolorous Edd.

The Night King walks to Winterfell, leaving his newly raised army to destroy Jon.  But just as it seems Jon will be overrun by the dead, Dany gives him an assist with some dragon fire, and Jon runs back into Winterfell. The dead start stabbing and jumping atop Drogon, causing Dany to fall to the ground. She seems doomed, until Jorah shows up to save her.

Winterfell has now been completely overrun, including the supposedly safe crypt where Sansa and Tyrion are hiding together. Everyone everywhere — including Jaime, Brienne, Sam, Podrick Gendry and Tormund — are hacking away at the zombie horde, and losing.

At the godswood, Theon kills all the attackers coming after Bran.  But when the fighting stops, there stands the Night King, whom it seems is about to make good on his mission to kill the Three-Eyed Raven.

Bran returns from warging and, in a rare show of emotion, tells Theon he’s a “good man,” and thanks him. With his redemption story now complete, the former coward Theon now charges at the Night King and certain death.  The Night King breaks Theon’s spear and then stabs and kills him.

Now the Night King slowly, inexorably approaches the ever-calm Bran, and all hope seems lost. But just as he’s about to take his icy sword out of its sheath to deliver the killing blow, Arya freaking Stark leaps out of seeming nowhere behind him, Valyrian steel dagger in hand.

The Night King whirls immediately and grabs her by the throat, holding her suspended before him.  But just as that brief moment of despair surfaces, Arya drops the knife from her upraised left hand into her right hand — low and out of sight — and stabs the Night King him in the torso.

The Night King explodes into ice, as do his lieutenants behind him.  Inside and around Winterfell, as the stunned defenders watch, every wight immediately collapses into final death, including Viserion, just as it was about to roast Jon Snow with ice-blue dragonfire.

But outside Winterfell, Ser Jorah Mormont — who’d been stabbed many times defending Dany — finally collapses.  A weeping Daenerys cradles his head and Jorah’s lips move, but utter no final words.  He dies, and the great unrequited Game of Thrones love story comes to its end.

Melisandre, who earlier in the episode promised Ser Davos that she wouldn’t survive the night, makes good on her words.  She walks out into the icy, bloody battlefield just as the sun rises.  She removes her charmed necklace and becomes her true self — an ancient crone, her flame-red hair turning white.  And she falls to the ground, dead.

There are only three episodes of Game of Thrones left.  The show returns next Sunday night at 9:00 Eastern on HBO.