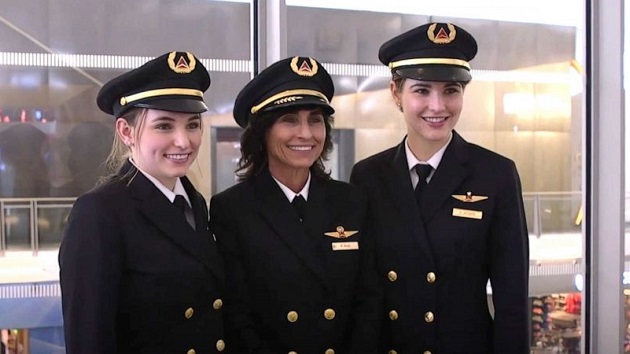 (NEW YORK) — On a warm Los Angeles afternoon, Kelly Jacobson is inspecting nearly every external inch of her 200,000-pound aircraft through the thick aviator sunglasses she fuses with her Delta Air Lines uniform. She’ll be flying the Boeing 757 alongside a pilot she has a lot of hours with outside the cockpit. Several families inside the terminal are collecting their belongings in preparation to board the more-than-three-hour flight to Atlanta. Some of the children are sporting fresh plastic wings pinned to their shirt, a gift from the pilots.Wendy Rexon and Kelly Jacobson are mother and daughter; today is almost like every other day. They have already begun a routine they’ve completed hundreds of times individually but only a couple times together: arrive at the airport an hour before scheduled departure, debrief with the gate agent, walk around the aircraft and a pre-flight checklist so ingrained in their memories it only takes about 30 seconds.Kate Rexon, also a Delta pilot, flies the Airbus A320 for the airline, so aviation is the “family business.”

Flying as a family“We would run around in their captain hats and have fun as little kids and go on their trips with them,” Kelly, Wendy’s oldest daughter, told ABC News. “It was definitely part of the family business, and I started flying when I was 16, and I had the pleasure of being Kate’s instructor and she was my first student.””Kelly was my instructor she was my instructor and I didn’t treat her like a sister because at that point, you know, she wasn’t,” Kate responded. “She was my teacher and that I think it made us both grow.”Kate, the younger daughter, said she “dabbled” in other career aspirations, but she too ultimately fell in love with aviation.A Rexon vacation wasn’t like most. At an age when many parents wouldn’t dream of letting teenagers drive during a long road trip, Kate and Kelly wore the proverbial captain’s hat at an altitude of several thousand feet.”When Kate and I were building time in little airplanes we go on vacations and mom and dad are in the back seat,” Kelly described, with her mother and former flight instructor there next to her.”Mom would sit actually in the back of the airplane. It was a little four-seater and she’d say, ‘no, no,"” Kelly recalled.Wendy describes the opportunity for her daughters as a safer alternative to other temptations: “Other parents would say, ‘How can you let your children fly airplanes?"”The mother continued, “Boy, I’d much rather give them the keys to the airplane than go with their friends out late at night to parties. You know, driving in the cars.”

Reaching for the skyBut not many young women grow up in a family of pilots — Wendy’s husband is a pilot at American Airlines, and she got started at 16.It’s no secret there’s a shortage of female pilots at U.S. carriers. Only 7 percent of pilots are women, according to 2017 data from the Federal Aviation Administration.Wendy credits programs at airlines around the country, like Delta’s “Women Inspiring our Next Generation,” which promote young women in careers in aviation. The issue, she said, boils down to a lack of awareness.”They just don’t think about it as an option,” Kate said.But the family hopes women like themselves can inspire the next generation.”We’re honored to be advocates for young women to join the field, and and just the industry in general,” said Kelly, alongside her mother and sister.

Ready for anythingWhile all three women describe their experience flying together as a “dream come true,” there have been challenges — as there are with any profession.Wendy and Kelly first flew together professionally in February on a flight out of New York’s John F. Kennedy International Airport, and the trip didn’t go exactly as planned — there was “an extra twist.”The flight was taking off for Los Angeles when smoke and fumes materialized in the cockpit, not an exceedingly rare occurrence, but an event that requires the plane to divert before conditions worsen. Wendy and Kelly decided they were going to return to JFK.”Delta 1975, we’re going to stop on the runway, we need them to come check us out, there’s no smoke in the cabin, but there’s smoke in the cockpit, we’re gonna open the windows,” Kelly is heard telling the JFK control tower on air traffic control audio obtained by ABC News via LiveATC.net.The flight landed safely, and the airline got the passengers to Los Angeles, but it was Wendy’s first time seeing her daughter pilot an emergency landing.”She was fantastic,” Wendy said. “It was a difficult situation that was made easier because of that because of the training and because of her competence.”Wendy’s pride in her daughters and their pride in each other is evident.”Kelly is one of the hardest working people that I know and she’s a leader,” Kate said.”My husband and I, sometimes we just look at each other and say, ‘It’s so great,"” Wendy said. “They were so motivated, so talented, and we just kick back and say, ‘Wow, they achieved it.’ And we’re so happy.” Copyright © 2019, ABC Radio. All rights reserved.