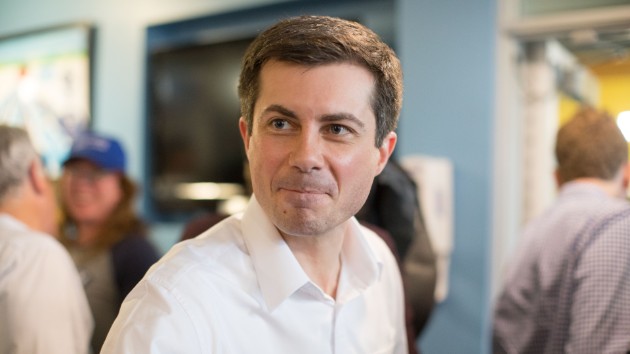 (NEW YORK) — For the second time this month, South Bend, Indiana Mayor Pete Buttigieg met with the Rev. Al Sharpton in New York City, as the rising Democratic presidential candidate seeks to gain the support of the influential civil rights leader in the African American community.The two had lunch at Sylvia’s restaurant in Harlem on Monday and discussed “the need to confront homophobia in the faith community as well as the Mayor’s policy agenda for the black community in Indiana and around the country,” according to a statement from his campaign.Over lunch, the reverend asked the Afghanistan war veteran about his decision to come out as gay while mayor in South Bend.”How did you get the courage to decide, ‘I’m just going to go ahead and be open?"” Sharpton asked.”Well, part of it was the deployment,” Buttigieg said, “I was pretty good at living separate identities until I got to Afghanistan.”Reflecting on the dangers of war, Buttigieg said, “You only get to be one person, especially if your life ends.”Sharpton has only hosted one other 2020 candidate for lunch at Sylvia’s so far this year — Sen. Kamala Harris, in February. He vowed not to endorse anytime soon, but said, “I am going to endorse at some point.”On the menu for Buttigieg was fried chicken, collard greens and macaroni and cheese. Sharpton opted for just a small plate of toast, but both said their blessings before eating.The civil rights leader who ran for president in 2004 gave Buttigieg some tips about the campaign trail, which the New Yorker described as a long road.”Nobody can prepare you for the grind, and I think that the thing that is the most important is being authentic,” Sharpton said.On April 4, Buttigieg spoke at Sharpton’s National Action Network Conference, where he said five areas needed to be addressed to help the black community: justice, entrepreneurship, education, health care and home ownership.”It’s not enough to say we want home ownership for all when we know that it’s not automatic that that will make families of color better off,” Buttigieg said. “Families of color have been systematically excluded.”At the conference, Sharpton complimented Buttigieg for offering “substance not sound bites” but had trouble saying his name, joking that he was still learning to pronounce it and not to take it personally. It took him time to learn former President Barack Obama’s name in 2008, he said. Sharpton ultimately endorsed Obama.Buttigieg has not formally released any detailed policy proposals, but he’s thrown support behind some key agendas for black voters, including as criminal justice reform, legalizing marijuana and approving a bill that would study reparations for descendants of slaves.In the latest national ABC News/Washington Post poll, Buttigieg received 5% of support among Democrats and Democratic-leaning independents, trailing only former Vice President Joe Biden, who polled at 17%, and Sen. Bernie Sanders, at 11%.Next week, Buttigieg is scheduled to visit South Carolina, the first primary state in the South, where African Americans make up nearly 30% of the population.Additionally, their largely Democratic voting base is expected to compose of 12.5% of the national electorate in 2020, according to Pew Research Center.

Buttigieg, who made his first trip to the state last month, will be in Charleston on May 5, according to his campaign, and hold a roundtable event at South Carolina State University, a historically black college, the following day.