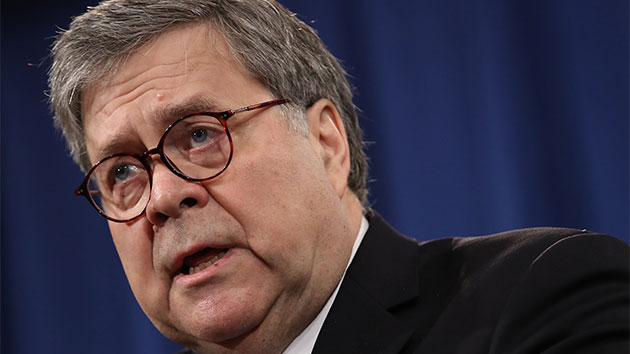 (WASHINGTON) —  The Justice Department has told the House Judiciary Committee that Attorney General William Barr would not testify this week about the Mueller report if members move ahead with their proposed format of questioning, according to a senior committee aide.

Democrats told DOJ and Republicans Friday they wanted to give majority and minority staff counsel 30 minutes to question Barr at the end of the hearing.

Barr is expected to testify before the committee on Thursday, after appearing before the Senate Judiciary Committee on Wednesday.

Members only have five minutes to question Barr. The extra half hour for each side, the Democrats reason, would give committee lawyers additional time to follow up.

Barr, however, would skip the hearing if that plan remains in place, according to the committee.

A Justice Department spokesperson said discussions about the format would continue Monday. The DOJ’s position, however, is that since it’s a congressional hearing, members should ask the questions.

The testimony from the attorney general comes after the redacted release of the highly-anticipated Mueller report, which for nearly two years investigated Russian meddling in the 2016 presidential election and whether anyone from then-candidate Donald Trump’s campaign colluded with them. The special counsel report did not recommend charging the president with any crimes, but highlighted ways investigators say Trump tried to thwart the inquiry.

The committee said there was precedent for requesting extra time for questioning. Democrats cited Watergate and the Kavanaugh hearings in the Senate as well as the Clinton impeachment hearings in the House, among others, as examples when committee counsel questioned witnesses.

A spokesperson for the House Judiciary Committee Republicans called the planned format “abusive and illogical.”

“The attorney general isn’t a fact witness, and this committee’s investigations—as Democrat leadership reminds us daily—don’t constitute impeachment, so Democrats have yet to prove their demands anything but abusive and illogical in light of the transparency and good faith the attorney general has shown our committee,” the spokesperson said.

The committee also wants to subpoena Don McGahn. The report described how the president tried his former White House counsel to remove the special counsel and deny news reports about his actions afterward.

Democrats have issued a subpoena for his testimony.

The committee would also like Mueller to voluntarily testify later next month.