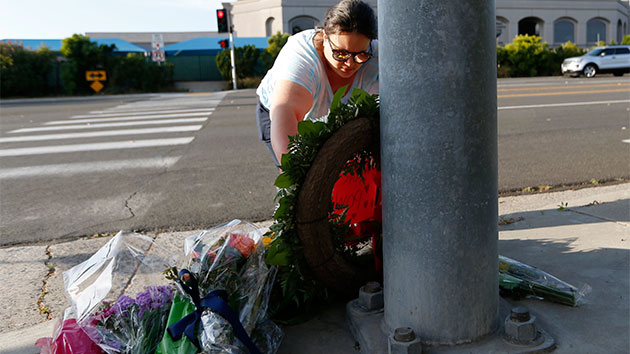 (SAN DIEGO) — The news of a deadly shooting in Poway, California, on Saturday brought back memories of several recent attacks on houses of worship, including last weekend in Sri Lanka, last month in Christchurch, New Zealand, and exactly six months prior at a Pittsburgh synagogue.

President Donald Trump reacted both before leaving for a rally in Wisconsin and on Twitter, saying on the White House’s South Lawn, “My deepest sympathies go to the people that were affected, the families, their loved ones. By the, obviously, looks right now based on my last conversations, looks like a hate crime. We’ll get to the bottom of it.”

Trump’s comments have drawn some derision for a level of hypocrisy, as he spoke one day prior at a conference for the National Rifle Association.

The suspect in the shooting, 19-year-old John Earnest, said he was not a fan of Trump in online writings.

The nearly 20 Democratic candidates on the campaign trail over the weekend were quick to respond to the shooting, as well.

California Rep. Eric Swalwell was the only one to directly mention Trump, saying in a response to Trump’s tweet, “Spare us your thoughts and prayers. It’s an alibi for inaction. You told the NRA yesterday you’d keep dangerous guns in the hands of dangerous people. We will take it from here with action.”

The rest of the candidates focused on protecting peoples’ rights to practice religion in safety, regardless of the denomination.

“Jill and I are devastated to hear about today’s shooting at the Chabad Poway synagogue. No one should have to worship in fear. As a country, we must speak out against bigotry and gun violence. We’re in the battle for the soul of this nation—and it’s on all of us to act.”

“Praying for comfort and healing for the Chabad of Poway congregation today, as we deal with yet another mass shooting at a house of worship, fueled by anti-Semitism. Gun safety reform needs to happen—now.”

“This Shabbat brings another deadly attack on Jews, at worship, on American soil. Whenever anyone comes to harm because of their faith, we are all diminished. We cannot rest until hate has no home.”

“My deepest condolences are with the community of Chabad of Poway as they mourn this despicable attack on their community. On this last day of Passover, we know without a doubt that hate and anti-semitism are on the rise and our tears today are bitter.”

“6 months since the synagogue massacre in Pittsburgh & on last day of Passover, a gunman opened fire at Chabad of Poway synagogue. We must stand united & condemn this anti-semitism & all religious bigotry. An attack against one of us for our religion is an attack against all of us”

“Something is fundamentally broken in our society when any house of worship is made unsafe by gun violence and hate—again and again and again. I’m keeping Poway and the entire Jewish community in my prayers. More than that, I don’t accept this. We must end this epidemic.”

“Yet again a place of worship is the target of senseless gun violence and hate. Anti-Semitism is real in this country and we must not be silent – enough is enough. My heart aches for the Chabad of Poway synagogue and the Jewish community.”

“The news out of Poway, CA is devastating and all too familiar. Another place of worship, another peaceful sanctuary, shattered by gun violence and hate. We cannot continue this cycle. We must stand up to hate and take real action on gun violence. Chabad of Poway, we are with you.”

“Today should have been a celebration for the Chabad of Poway synagogue. Instead, they are mourning shattered lives — I mourn with them. We must reject anti-Semitism and the do-nothing attitude about gun violence legislation in Congress.”

“Heartbroken by the gun violence at Chabad of Poway synagogue on the last day of Passover. I stand with our Jewish neighbors and their freedom to practice their faith without fear. We must act now to end this hatred and gun violence. May the memories of those lost be a blessing.”

“Andrea and I are deeply saddened about another hate crime in America. We are keeping all the members of the Chabad of Poway synagogue and the entire American Jewish community in our prayers.”

“Another horrific shooting at a place of worship, today at the Poway Synagogue in San Diego County. We must work every day to eradicate all forms of hatred and bigotry, and take serious action to protect Americans from gun violence.”

“Houses of worship are supposed to be safe havens in our communities. However, with unrestricted weaponry in America, they are no longer. Mourning those lost today in Poway, CA and praying for those who have been injured. We will honor them with action.”

“I’m heartsick for the victims of today’s horrific attack at the Chabad of Poway and their families. No one should ever have to face hatred and violence in a place of worship. It’s on all of us to stand up to the rising threat of anti-semitism, racism, and hate.”

“Horrified by the synagogue shooting in San Diego. May all hearts be comforted. Violence against anyone due to their religion is an undermining of everything this country stands for. As Americans, and as children of God, let us rise.”

“Our hearts go out to the families affected by the synagogue attack in San Diego. Attacks on Americans worshipping in peace are particularly hateful and devastating. There is no place in America for this sort of hate. #HumanityFirst”