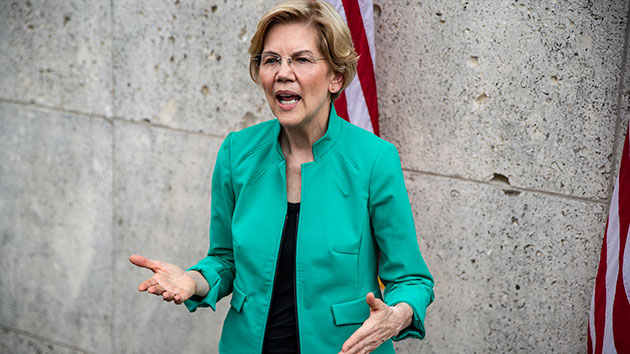 (NEW YORK) — Ayo Ihedioha, a junior marketing student at Texas Southern University, estimates that she’ll have $200,000 worth of student loans when she completes her education.When asked about student loans, she offered a simple appeal to 2020 candidates.”Eliminate them the best way you can,” Ihedioha said. “Because it’s not easy graduating, you already have to think about life after college, and then you have to think about your student loans.”Ihedioha is just one of the millions of Americans who carry student loan debt.Two candidates have made tackling student debt through loan cancellation a major part of their platforms. Sen. Elizabeth Warren published her plan to cancel some student debt for those who owe. Florida Mayor Wayne Messam wants to cancel all federal and private student loans in full — a one-time bailout.Both candidates would look to the wealthy to fund student debt cancellation. Messam’s plan would pay the $1.5 trillion price tag by rolling back the Trump administration’s tax cuts for the rich.Other candidates support alternative means of tackling student debt, including supporting the Debt-Free College Act, which would allow students to attend public colleges for free.“We feel that that burden should not be borne just by the working class and middle-class individuals,” Messam told ABC News. “So we feel that by eradicating this debt first, we can work on lowering the cost of higher education.”Warren’s plan would cancel up to $50,000 in student loan debt, depending on a borrower’s income. Warren’s plan proposes an “ultra-millionaire tax,” a 2 percent tax on families with more $50 million in wealth.Mark Kantrowitz, vice president of research for Savingforcollege.com, called the funding methods unlikely, and said Warren’s plan won’t make a significant impact.“People have been talking about Senator Warren’s proposal as though she’s wiping out all student loan debt. She’s not even coming close to half of it,” Kantrowitz said. “While it’s very popular among millennials — because everybody would love free handouts — I don’t see it as addressing any major public policy objective.”Randi Weingarten, president of the American Federation of Teachers and a proponent of Warren’s plan, said many of her members are struggling to keep up with student loans. She called debt cancellation a “fundamental first step.”“I think that if we don’t actually do something to help people now, shame on us,” said Weingarten. “Post-secondary education should be a public good and available for everyone who wants or needs it.” Copyright © 2019, ABC Radio. All rights reserved.