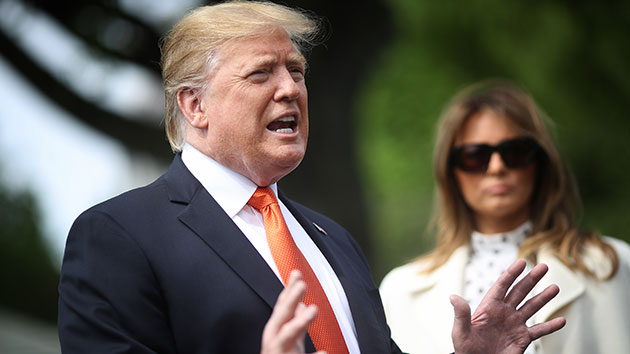 (WASHINGTON) — Declaring the Mueller investigation “the most thorough investigation, probably, in the history of our country,” President Donald Trump on Wednesday called the subpoena for his former White House counsel Don McGahn “ridiculous” and argued his team shouldn’t be subject to any further inquiry.“I say it’s enough,” the president told reporters as he left the White House Wednesday morning for a trip to Atlanta.“The subpoena is ridiculous. We have been — I have been the most transparent president and administration in the history of our country by far,” Trump said, repeating his usual claim that there was collusion, no obstruction, and that any potential wrongdoing was perpetrated by Democrats.The president also seemed to be suggest that the Mueller probe, in its thoroughness, also cleared him of any questions related to his taxes and financial holdings.“Mueller, I assume, for $35 million, checked my taxes, checked my financials — which are great, by the way — but they checked my taxes and they checked my finances, I assume,” Trump said.But despite the president’s assumption, the president’s personal finances were not a subject of Mueller’s investigation, which focused on Russian interference in the 2016 campaign and questions of obstruction of justice.Asked a second time about the subpoena for McGahn and White House plans to resist, the president said “we are fighting all the subpoenas,” arguing that all the investigative efforts from congressional Democrats are politically motivated.“These aren’t, like, impartial people. The Democrats are trying to win 2020. They’re not going to win with the people that I see, and they’re not going to win against me. The only way they can maybe luck out — and I don’t think that’s going to happen — the only way they can luck out is by constantly going after me on nonsense.”Copyright © 2019, ABC Radio. All rights reserved.

Amazon driver rescues baby abandoned in Houston, reunites him with mom
Tacoma Police officer who hit at least one pedestrian with patrol car placed on administrative leave
Winter storms moving across US with snow, freezing rain and flooding
‘Da 5 Bloods’, ‘Mank’, ‘Soul’ among AFI’s Movies of the Year; ‘The Mandalorian’, ‘The Crown’ top TV
‘Worst Cooks in America’ episodes pulled off air after season 20 winner charged with homicide
Kelley Flanagan says she would “consider” being the next Bachelorette