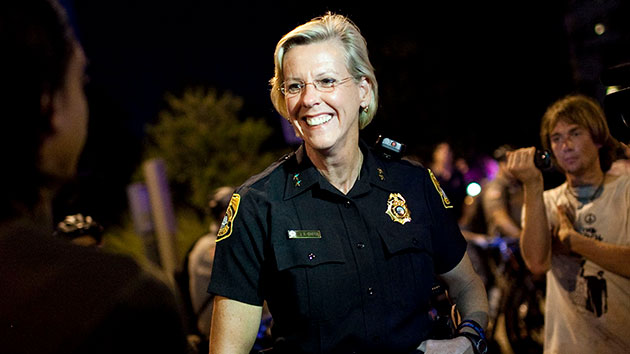 (TAMPA, Fla.) — Jane Castor made history on Tuesday, becoming the first openly LGBTQ mayor elected to lead Tampa, Florida.Castor, the city’s former chief of police, swept her opponent, retired banker David Straz, with 73% of the approximately 53,000 votes cast, according to the Hillsborough County Supervisor of Elections’ unofficial results.”How exciting is this?” Castor said Tuesday night to a cheering crowd as she raised her hands in the air. “The next mayor of Tampa!”With endorsements from organizations that advocate for LGBTQ rights, such as the Human Rights Campaign and Equality Florida Action PAC, Castor joins a growing number of openly LGBTQ elected officials nationwide.According to the Victory Institute’s Out for America database, which tracks LGBTQ representation among elected officials, just 0.13% of elected officials nationwide identify as LGBTQ. That’s compared to about 4.5% of U.S. adults in 2017, according to a Gallup poll.Castor joins 37 openly LGBTQ mayors nationwide, three of whom are in Florida, according to the Victory Institute.In fact, Castor had already made history in Tampa before winning the mayor’s race. She was the first woman and first gay woman to serve as Tampa’s police chief; she worked in the department for 31 years, beginning as a beat cop, according to her campaign website.Castor touted her record of reducing the city’s crime rate, and campaigned on improving Tampa’s infrastructure, transportation and economy. During her victory speech Tuesday night, she thanked her family, staff and supporters for the landslide victory.”That sends a resounding message to our community,” Castor said. “No, it sends a resounding message to the nation that Tampa celebrates its diversity and lifts everyone up in a positive way.”LGBTQ representation increased nationwide with the 2018 midterm elections, raising the number of openly LGBTQ members in Congress to 10.And increased LGBTQ representation has a chance to reach the country’s highest office, as South Bend Mayor Pete Buttigieg, who is openly gay, announced his presidential run earlier this month.But like Castor told her supporters in Tampa Tuesday night, “there is so much yet to be done.”Currently, there is no federal law protecting LGBTQ Americans from discrimination, such as being denied housing or fired from their job, based on sexual orientation or gender identity.The U.S. Supreme Court announced Monday that it will hear three cases this fall involving employment discrimination against LGBTQ Americans. The court’s ruling could determine whether federal civil rights protections extend to LGBTQ people.Earlier this month, the Pentagon’s new policy placing limits on the military service of transgender members went into effect, and one transgender ROTC cadet said he lost his military scholarship at the University of Texas due to the Trump administration’s policy.But Tuesday night, reveling in her victory, Castor was focused on the future of what a city such as Tampa could be.”If you stand with me, I’ll take us there,” Castor said.Copyright © 2019, ABC Radio. All rights reserved.