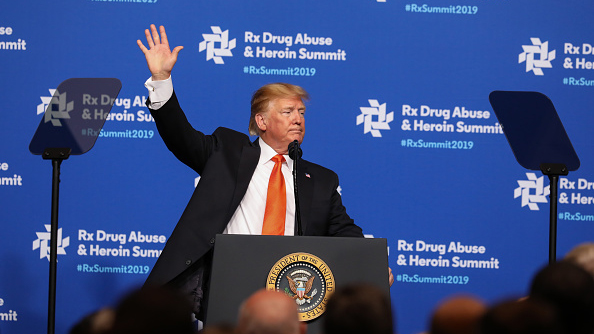 (WASHINGTON) — President Trump vowed to fight against the opioid epidemic and took credit for recent progress combating the public health emergency at the Rx Drug Abuse and Heroin Summit in Atlanta on Wednesday.”Everyone here today is united by the same vital goal, to liberate our fellow Americans from the grip of drug addiction and to end the opioid crisis once and for all,” the president said.”My administration is deploying every resource at our disposal to empower you to support you, and to fight right by your side. That’s what we are doing. We will not solve this epidemic overnight, but we will stop — nothing is going to stop us,” Trump said.Combating the opioid epidemic has been a top domestic policy prioity for the administration and a focus of the first lady’s Be Best campaign that has found widespread, bipartisan support. The Trump administration secured $6 billion in new funding over the next two years to combat opioid abuse. Earlier this month, HHS announced a $350 million plan to reduce opioid deaths by 40 percent in three years in certain communities.Earlier Wednesday, speaking from the South Lawn, the president also claimed credit for progress combating the epidemic.”It’s a big problem, it’s a big addiction, and we’re handling it,” Trump said. “The doctors are working with us, the labs are working, the clinics are working, the pharmaceutical companies are working with us, and we’ve made a tremendous amount of progress.”Despite the president’s claims of progress, the statistics surrounding the epidemic remain staggering: On average, 130 Americans die each day from opioid overdose and opioids were involved in 47,600 overdose deaths in 2017 (67.8% of all drug overdose deaths), per the Centers for Disease Control.The president also claimed — without providing specifics — that the problem is down “17 percent from last year.”White House spokesperson Judd Deere clarified the president’s statement and noted that since President Trump took office, “the total number of opioid prescriptions dispensed monthly (by retail and mail-order pharmacies) has declined by at least 17%.”Before speaking in Atlanta, the president was introduced by the first lady, who referenced the work she has done with her Be Best campaign.”I have seen firsthand both the medical and personal results of this crisis. I have visited hospitals and treatment centers around the country. I have met with doctors, nurses, mothers, and children,” the first lady said. “We will continue to raise awareness of the dangers of opioids to unborn babies. We are also committed to supporting more treatment facilities that have both bond of addiction with the bond of love between a mother and her child.”“My husband is here today because he cares deeply about what you are doing to help the millions of Americans affected by the opioid epidemic.”The president also veered off script during his remarks, and claimed that he was victim of a rigged system when talking about foreign pharmaceutical company drug pricing.“At long last we’re stopping the drug companies in foreign countries from rigging the system,” Trump said. “I know all about the rigging the system because I had the system rigged on me.”He also touted the work of drug-sniffing dogs like German Shepherds who work alongside CBP officers at the border.”Dogs do a better job than four hundred million dollars worth of equipment,” Trump said. “We have a lot of dogs and they’re great dogs and we cherish them.”