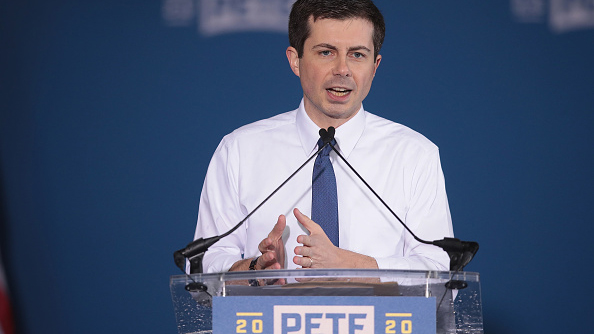 (NEW YORK) — Conservative Evangelical leader Franklin Graham is blasting South Bend, Indiana, Mayor Pete Buttigieg for being gay and is calling on the presidential hopeful to repent for his “sin.”In a series of tweets to his 1.9 million followers on Wednesday, Graham said, “Mayor Buttigieg says he’s a gay Christian. As a Christian, I believe the Bible which defines homosexuality as a sin, something to be repentant of, not something to be flaunted, praised or politicized. The Bible says marriage is between a man & a woman – not two men, not two women.”Graham, the 66-year-old son of the late Billy Graham, began his attack by referring to Buttigieg’s comments at a CNN town hall on Monday, where the mayor said “God does not have a political party” while answering a question on uniting conservative, moderate and liberal Christians behind his 2020 campaign. “Part of God’s love is experienced, according to my faith tradition, is in the way that we support one another and, in particular, support the least among us,” Buttigieg said. “It can be challenging to be a person of faith who’s also part of the LGBTQ community and yet, to me, the core of faith is regard for one another.”Graham responded by tweeting “[Pete Buttigieg] is right – God doesn’t have a political party. But God does have commandments, laws & standards He gives us to live by.”Mayor Buttigieg, an Episcopalian, has not shied away from discussing his faith during the early run of this presidential race.Most recently, Buttigieg quarreled with Vice President Mike Pence over the “hypocrisy” of supporting President Donald Trump while boasting his Christian values.“When you have somebody seeming to want to impose his religion on others as the vice president has, and at the same time teaming up with the presidency that seems to have no regard for, at least, what I would consider to be Christian values, I do think that hypocrisy needs to be called out,” Buttigieg said on Good Morning America earlier this month.Pence responded by saying that they had a “great working relationship” during his time as governor of Indiana and criticized the mayor’s description of his religious beliefs.“He knows better, he knows me” the vice president said.In response to Graham’s tweet, celebrities and LGBT organizations slammed the attack on the 37-year-old mayor.”Franklin Graham is a sad, out of touch extremist who has spent the last several years selling his soul for parts in order to excuse Donald Trump’s worst behavior,” Chris Sgro, Senior Director of Communications for the Human Rights Campaign, told ABC News.Ross Murray, Senior Director at the GLAAD Media Institute and Deacon in the Evangelical Lutheran Church, says Graham needs to “stop the attacks on LGBTQ Christians and allies like Buttigieg, and focus on the Gospel’s call to protect those most marginalized.”“Franklin Graham’s relentless attacks on Christians who are a part of the LGBTQ community, while excusing the very un-Christian actions of President Donald Trump, demonstrates that he has been seduced by worldly power and fallen prey to sin,” Murray said in a statement to ABC News.

Jelani Day’s cause of death was drowning, coroner says
HBO’s ‘Succession’ picked up for season four
See Sandra Bullock as an ex-con in trailer for Netflix’s ‘The Unforgivable’
Chris Hemsworth once thought he was being written out of the MCU
FDA panel meets on COVID-19 vaccine shots for kids under 12: Five things to know
Parents brace for more limited Child Tax Credit in Democratic dealmaking