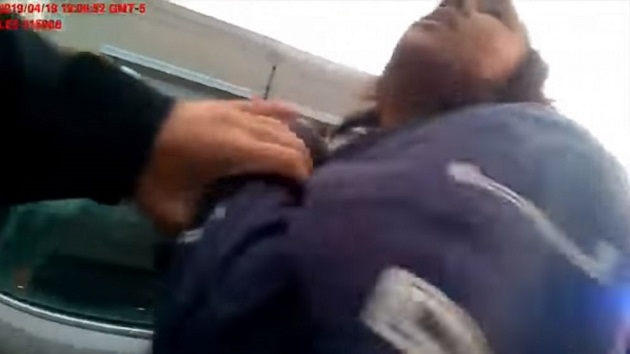 (TUSCALOOSA, Ala.) — Police investigating the brutal arrest of an Alabama woman have released body camera video of the encounter after witness video posted on social media caused outrage.Officers were called to a scene in Tuscaloosa at 6:40 p.m. on Friday in reference to someone leaving the scene of an accident. Approximately 25 minutes later, officers located the vehicle that they said left the scene, allegedly driven by Jhasmynn Alexiss Sheppard, according to Tuscaloosa police.After pulling Sheppard out of the vehicle, video shows the officers having a physical confrontation with her in an effort to take her into custody.After a video of the incident posted on social media went viral over the weekend, the Tuscaloosa Police Department released body camera video from one of the officers, only identified by his last name, Ward, on Wednesday.In the five-minute body camera video, the two officers pull over Sheppard. Before she can give them her license and registration, officers begin to pull her out of the car.The officer tries to put Sheppard in handcuffs, but she tries to turn away and before being cuffed, she goes to the ground. Ward asks her if she’s “lost her freakin’ mind.”Much of the rest of the video is obscured because the camera was knocked off Ward’s body. The camera of the second officer, only identified by his last name, Lackey, was covered by a raincoat at the time.Sheppard cries out as an officer is heard cursing and threatening her, while one officer is heard shouting that he is going to kick her teeth out.One of the officers can be seen taking out and striking Sheppard with his police baton. She’s heard whimpering, “It hurts so bad.”An officer, believed to be Ward, is heard telling her she’s “lucky I didn’t put my gun in the back of your noggin… I could’ve shot you! Do you know how stupid you are?”In a press conference Wednesday, Police Chief Steven Anderson said the video is “offensive to many. The language and conduct. It is also offensive to myself. It does not reflect the trainings to teaching that we do here at the Tuscaloosa Police Department. It’s unacceptable and we do not condone that.”Sheppard left the scene of an accident she was involved in, Anderson said, which was why she was pulled over.She was charged with resisting arrest, second degree assault and disarming law enforcement.Anderson said that when he first saw the bystander’s video of Sheppard’s arrest, “I didn’t think that the force was excessive but I did feel that it warranted a second look and a more in-depth investigation.”He said the investigation began on Saturday.“It was not until Monday afternoon when I saw this body camera video did I become concerned,” Anderson said. “I had a serious problem with the conduct and threats they were making. I was disappointed and disgusted.“Anderson said he had been speaking with the city attorney about possibly getting the charges against Sheppard dismissed.Both officers have been at the department for less than two years and have both been assigned to desk duty while the investigation continues.The officers will go before a disciplinary board, who will make a recommendation to Anderson, who will then make his own recommendation to the city attorney.