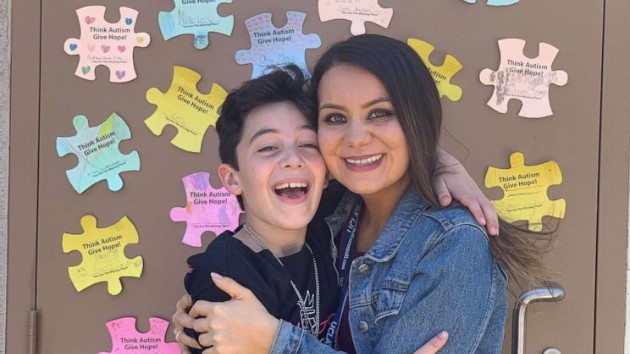 (CHINO HILLS, Calif.) — A video of an 11-year-old boy revealing to his class that he is autistic may be the most powerful moment you’ll see today.Rumari Zalez, a fourth grade student at Eagle Canyon Elementary in Chino Hills, California, stood up in front of his classroom on April 5 and told his peers what it’s like to be on the spectrum. The impromptu footage was filmed by Rumari’s teacher, Lisa Rachel Noe. Noe posted it on Facebook where it has garnered 13,000 views.”I wasn’t imagining that I was going to capture what I captured,” Noe told ABC News’ Good Morning America. “Seeing his confidence to stand up and do that…it has solidified my purpose of being a teacher and creating that environment to say unapologetically, ‘Like it or not, this is me."”Roe said that during that school day, she was giving a lesson in honor of National Autism Awareness Month. Rumari asked if he could stand up and say something. The other children were unaware that Rumari has autism, Noe said.”See other people who actually have it and make them feel like a somebody because for a very long time, you guys have not know I had autism,” Rumari can be heard saying in the video.Rumari goes on to address his differences and quirks before taking questions from his classmates. The kids applauded and even asked Rumari for “huggys” — a word Rumari likes to use when he wants a hug from a friend or family member.”I think you’re amazing pal,” one girl said.A classmate chimed in, “It doesn’t matter what a person does or if it may look weird or if they might make weird noises sometimes…they’re good just the way they are, like you, Rumari.””This is not a question, but I think you’re awesome just the way you are,” another friend said.Rumari’s mom, Olivia Dasso, told Good Morning America her son was diagnosed with autism at 3 years old. Dasso said she and her husband decided from the beginning that they were going to allow Rumari to discover the disability on his own.”We didn’t want it to be an excuse, a barrier or a boundary for him,” Dasso said. “We figured if it came up we’d have the talk, and it did come up.”A few months ago, Rumari was watching the trailer for the 1988 film, Rain Man, which features an autistic character, Dasso said.”He said, ‘I have that’ and the house kind of stopped,” Dasso recalled. “I said, ‘You know? Everybody has something.’ And then we just dropped it. He never brought it up again until he made that speech.”Dasso said the video of Rumari’s speech made her a “proud mom.” With thousands of views online, Rumari is enjoying the spotlight.”The first time we were walking in public he says, ‘Are they recognizing me now?"” Dasso said. he went on, “He was brave enough and had the courage to say, ‘Everybody has something different.’ The reaction of the kids so openly wanting to hug him… it was so warming to see that.”Dasso said Rumari has a message to other kids with autism: “You are unique like him and have a superpower. That’s something no bully has.”