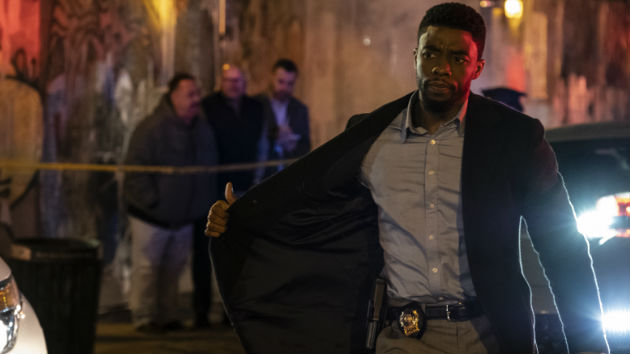 (LOS ANGELES) — Chadwick Boseman is a NYPD detective on a mission in the first trailer for his upcoming action thriller 21 Bridges.

The film, which reunites Boseman with producers Joe and Anthony Russo — who directed him in Captain America: Civil War, as well as Avengers: Infinity War and Endgame — also stars If Beale Street Could Talk’s Stephan James, alongside Sienna Miller, Keith David, Taylor Kitsch and J.K. Simmons.

Game of Thrones and The Tudors veteran Brian Kirk directs.

21 Bridges follows Boseman as an embattled NYPD detective, who gets a shot at redemption after being called to help in a citywide manhunt for a cop killer. As the search intensifies, authorities go to extreme measures to prevent the killers from escaping Manhattan by closing all 21 bridges.

This is latest project for Black Panther’s real-life alter-ego, who is also producing the film adaptation of The Stars in My Soul, a memoir co-written by Hakeem Oluseyi about his life. Chadwick’s also set to star in the upcoming thriller Expatriate, directed by Oscar-winner Barry Jenkins and Spike Lee’s Da 5 Bloods.

Delta adds 460 people to no-fly list for refusing to wear masks
Coloradans are voting on an abortion ban: What to know about Proposition 115
Turbulent week of weather is ahead for much of the country
Mike Pence’s chief of staff Marc Short, other top aide test positive for COVID-19
Former Convicted FL Felons Voting For The First Time
Lawyer for Ivanka Trump, Jared Kushner threatens suit over ‘defamatory’ Lincoln Project billboards