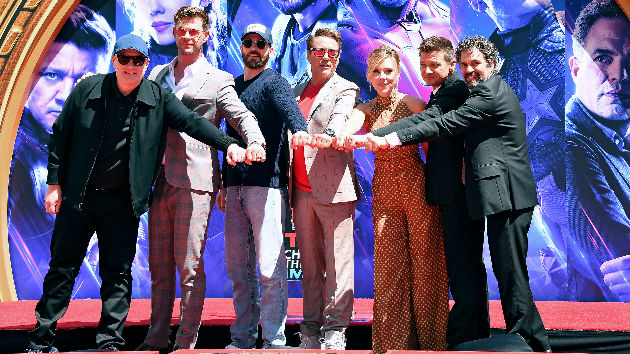 Photo by Steve Granitz/WireImage
Posted on April 23, 2019 by ABC News

Famed film critic Leonard Maltin emceed the festivities and assembled the Avengers in front of their respective cement spots. As per tradition, each star signed their names using a wooden stylus, before plopping their hands into the wet stuff, which they did on Downey’s count of three.

This was the second imprint for Downey, the Marvel Cinematic Universe’s first hero. The man who’ll be forever known as Iron Man had his hands placed in cement there for the first time in 2009.

Samuel L. Jackson, who is part of the Marvel Universe thanks to his recurring role as Nick Fury, had previously been immortalized at the theatre, as have actors who have starred in various Marvel movies over the past 10 years, including Mickey Rourke, Michael Douglas, and Anthony Hopkins.

Stan Lee, the comics legend who creator or co-created so many of the big-screen heroes, including Spider-Man, Iron Man, and Thor, was inducted in 2017. He died in 2018.

Incidentally, TCL Chinese Theater was a part of the MCU in another way: It was leveled by an explosion from one of The Mandarin’s underlings in Iron Man 3.

Avengers: Endgame officially opens on Friday, though many theaters are showing it Thursday evening. Marvel Studios, like ABC News, is owned by Disney.