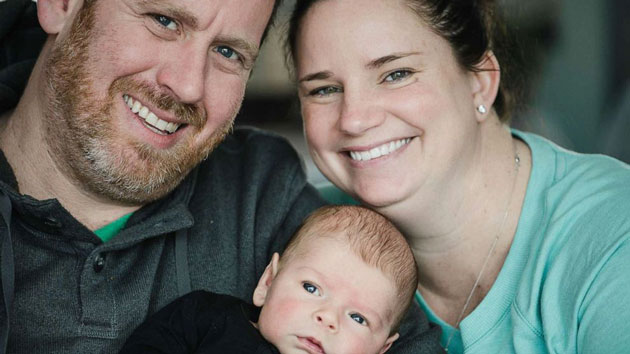 (NEW YORK) — Nearly one out of every eight couples in the U.S. are affected by infertility. For National Infertility Awareness Week, “GMA” is spotlighting infertility stories to help demystify and destigmatize all paths to parenthood.Kerri Morgan, 35, and her husband Chris Morgan, 38, always knew they wanted to have a family, but they never anticipated it would take nearly three years — and a roller-coaster ride of emotions — to finally meet their son.“We were meant to be parents and we were meant even more to be parents to Brian,” Kerri said as she rocked their son in a “Star Wars”-themed nursery at their home in Wappingers Falls, New York.Just six months into their marriage in 2016, Kerri was diagnosed with low ovarian reserve and faced issues with her fallopian tubes. Her ovaries were not functioning at the level expected for a woman her age; she was producing a diminished number of eggs, and it would be difficult for her to get pregnant.“For many of us, this is a disease that is not curable,” Kerri told ABC News, which followed the family’s path to parenthood for a full year. “Yes, there are treatment options … But there are many things that we cannot do.”One in eight American couples struggle with infertility, according to the Centers for Disease Control and Prevention. Based on 2015 data, 31 percent of the people using assisted reproductive technologies were diagnosed with “diminished ovarian reserve” like Kerri, according to the Society for Assisted Reproductive Technology (SART).Kerri, a self-proclaimed “fertility warrior,” opted for in vitro fertilization (IVF), but the couple allotted funds for only one cycle, which, along with associated medications, can cost between $10,000 and $15,000, according to SART.In the IVF process, eggs are removed from a woman’s ovaries during egg retrieval and fertilized in a petri dish, where the fertilized egg cell begins to divide. The resulting embryo(s) are eventually transferred back into the uterus to hopefully grow to a full-term pregnancy and live birth.The Morgans’ doctor was able to retrieve five eggs from Kerri, but the resulting two embryos did not survive.Kerri said she was heartbroken when they lost the embryos and said it felt like she lost her children.“Even though it was only two days, it felt like … we did it. We finally made babies,” she said through tears.New ways to start a familyDuring their grieving process, Kerri began to research other ways to start a family and came across the National Registry for Adoption. The site serves as a meeting place for people with leftover embryos from their IVF process, and families who are looking to adopt.There are more than 620,000 frozen embryos stored in the U.S., according to the Department of Health and Human Services.When Kerri brought embryo adoption up to Chris, she told ABC News she wasn’t sure if he’d be on board since it would remove his genetic makeup from their child. To Kerri’s relief, he was very supportive.“Part of me said it’s only fair. It’s not Kerri’s DNA, so why should it be mine?” Chris told ABC News.He said it felt like it was simply their next step in their path to parenthood.In September 2017, the Morgans adopted a pair of embryos from Becky and Jim Sykes in West Virginia, who had previously conceived two boys via IVF and then put their remaining two embryos up for adoption.Kerri and Becky struck up a friendship from across the country, exchanging emails and text messages with one another. Becky sent Kerri care packages and well wishes as she continued her IVF journey.Unfortunately, the transfer of the first donated embryo failed. Kerri said she felt guilty for the unsuccessful pregnancy, but after she spoke with Becky, she received nothing but love and support.Kerri wondered, “Is my body just not made to be pregnant?”After some adjustments to her medication and a few false starts, Kerri’s doctors at Hudson Valley Fertility Clinic in Fishkill, New York, were able to thaw and successfully transfer the second adopted embryo.When the Morgans received the good news, the first call they made — after speaking to their mothers — was to Becky, who screamed almost as loud as Kerri did upon hearing the news.“I’m so happy for you, pregnant lady!” she said to Kerri.“We wanted you to have this moment with us,” Kerri said in response.Celebrating baby Brian Luke“Kerri’s going to be the most amazing mother in the world. I feel as if the world will be a better place with someone that Kerri has guided through their life’s journey being in the world,” Chris said. “That’s why before I met Kerri, I knew I wanted to have a family someday, but once I met Kerri, I knew that we needed to have a family.”Redefining what it means to be a modern family, Kerri and Chris said they have maintained a friendship with the Sykes’.Brian’s two genetic brothers, 5-year-old Nate and nearly 2-year-old Anthony, have already started to get to know him. Both sets of parents said they’re planning to foster a friendship among the boys. For now, Kerri said that the boys ask to FaceTime with baby Brian and Nate is eager to celebrate Brian’s first birthday to give him presents.The families are planning to get together in person for the first time in June.“It’s another way that this entire story has been a complete blessing,” Kerri said. “We’ve gained them as a family.” Copyright © 2019, ABC Radio. All rights reserved.